2. Oktober 2018Blogs INTComments: 0
For some time now, I’ve been thinking about the way I have based my Peninsular War infantry with some concern. I’ve been basing my twenty four man units at four figures to a base, on six 40 mm x 40 mm bases plus a couple of bases with a couple of skirmishers on each.

At present this works because my table is quite big (usually 12′ x 6′) I have less than a dozen infantry units a side. However, my plan is to have double this number per side in my toy box and, although not all will appear in every game the frontage for, say, sixteen units in line is quite considerable (they have a combined frontage of nearly 13′ without intervals). Even counting some battalions in a second ‚reserve rank‘ I can’t see the current basing working in the long run.

Other problems with my current basing are purely aesthetic but, nonetheless, important to me. Apart from the figures looking a bit too spaced out, six bases poses problems of company position within battalions, especially when they are in line, especially for the French. In the few games we’ve played I’ve seen a kaleidoscope of company positions – green pompoms to the left, grenadiers in the centre, etc. It drives me nuts!

I think I’ve dug myself into a hole and there’s an old saying about being in a one:  „When you are in a hole stop digging.“ With that in mind the time has come to make a final decision about unit frontages before the number of units grows to such daunting numbers that the thought of re-basing becomes unbearable. It has to be done now or never……….

………A weekend later, the job is done. I have re-based all of my infantry, all 568 of them. My battalions are now based with four bases each, each with six figures, on 45 mm x 45 mm bases. Sixteen units now have combined frontage of 9½‘ – basically a case of deploy three, get a fourth one in for free. The skirmishers have also been re-based onto 60 mm x 45 mm bases with two or three figures per base. I’ve kept gun and cavalry basing the same. 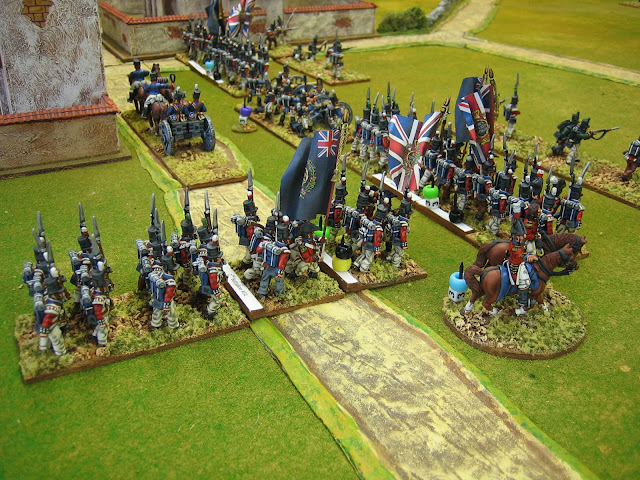 This is the exact same infantry basing style as my SYW units, which begs the question of why I chose to change in the first place. 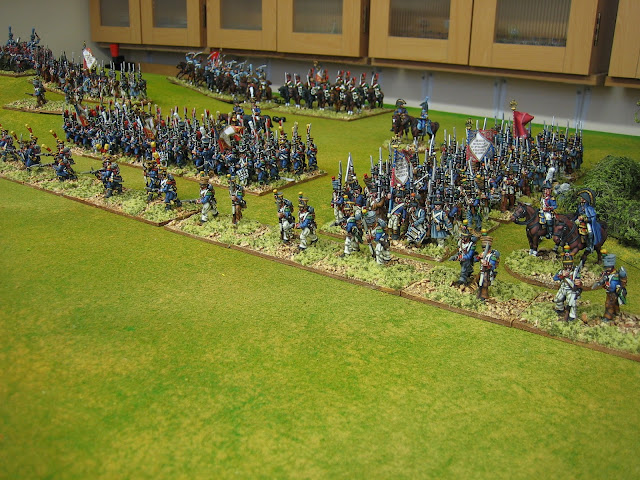 I think that the new basing, with only four bases per unit, will also help sort out company position within battalions – but that hypothesis will be only be proved true or false with time. 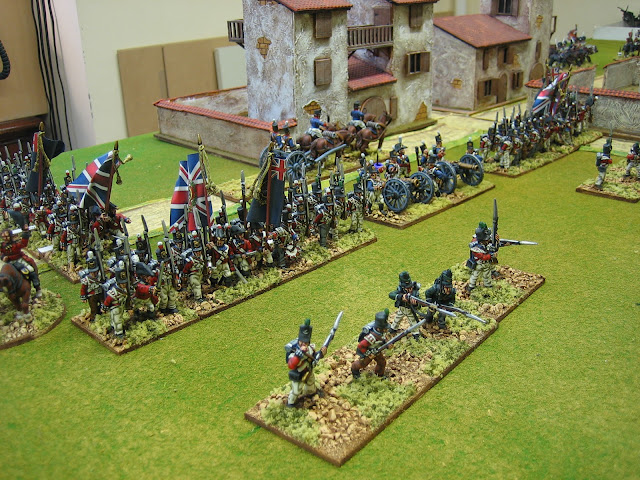 I’ve also decided to use the re-basing opportunity to add information pins for coloured beads. I had previously decided to heed the advice of others on this; that being to leave them off the unit bases, for aesthetic reasons, and use separate free standing pins. All very well in theory but a pain in the bum in practice. I’ve added two pins per unit to allow command group ID, unit quality, first fire indicator and other useful information to be physically carried by a unit. This will not be to everyone’s taste, but it works for me. 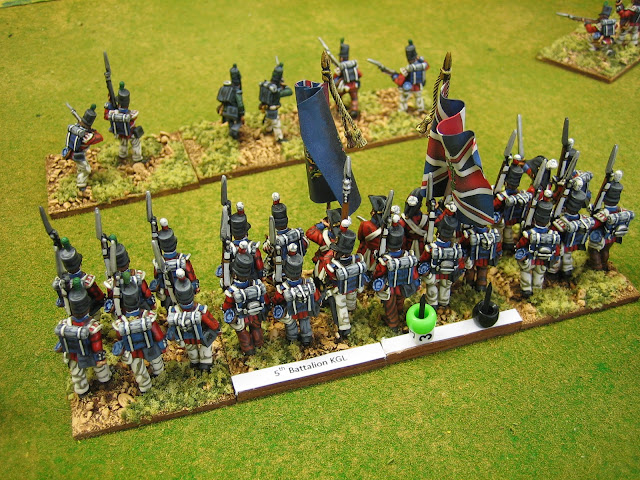 I’ve kept the highly visible unit name plates because I like it when players say things like „The 5th Battalion KGL will advance.“ rather than „This ‚unit‘ will move.“; I know what the units are by sight because I researched and painted them, but visiting players cannot be expected to know that level of detail about the composition of my collection – the name plates are a simple solution.

One more thing that I’ve made a final decision on. Apart from two units of British Guards I’m going to stick to 24 figure battalions; The Guards will be 36 figures. I’m also going to stick to twenty four units of infantry a side.

This (final?) decision has meant the gathering of some left over odds and sods (pictured below). 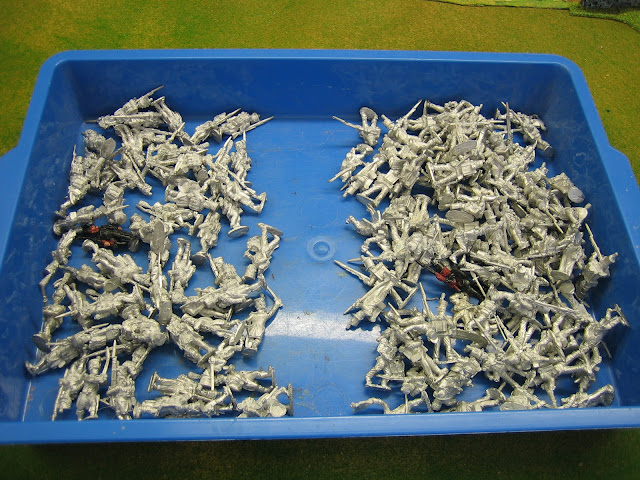 Most of these figures are ‚Reinforcement Pack‘ figures; all by Front Rank. There are 59 French figures. There are 94 British figures. That’s £191.25 worth. How the hell did that happen? I’m open to sensible offers (including postage) if anyone wants to take these off my hands. Money will be used on more figures. Contact me at: olicanaps@gmail.com