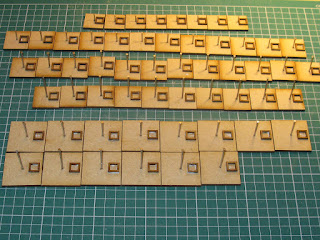 I decided to do something useful today, having a day off work, so assembled a selection of DIY bases for Wings at War. I haven’t decided if they will be for Desert Spitfires or MiG Alley yet, so I have made some 25mm x 25mm ones for light aircraft, some 30mm x 30mm ones for fighters and some 40mm x 40mm ones for bombers. I ran out of bases and dice frames so left out the Level 1 bases and will do those at a later date.
I also glued the dice frames in the centre line rather than in the corner, in a vacant frame of mind, but I don’t think that matters. I have ordered some more 3mm thick bases and frames from Warbases so will complete the missing ones when they arrive, add texture and paint them in either winter snow effect or desert sand, depending on which set of rules I decide to use them with. In the meantime, I’ll crack on with painting the planes for the Football War.