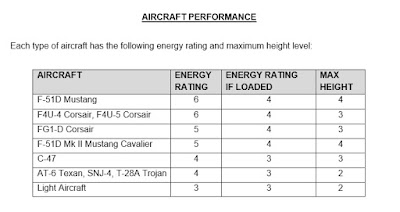 I have worked out the energy and height ratings for the various aircraft involved in the Soccer War or 100 hour war to give it it’s proper name. The thinking behind these numbers is based on my reading around the subject and on the comparative performance of the different fighters, trainers and civilian aircraft. I’ve also used a benchmark of the light, civilian and trainer aircraft ratings from Desert Spitfires, which is the set of rules that I’m adapting for the project.  There is a logic behind all of this but I’d be interested to hear your ideas too.

The F-51D gets the highest energy and height ratings, as it was the most agile and manoeuvrable aircraft, designed as a fighter but used as a fighter bomber by the FAS. The F4U-4 and F4U-5 have a lower maximum height but are otherwise comparable in energy terms. These were designed primarily as ground attack fighter bombers, so low level performance and the ability to lift a large ordnance load were prioritised at the expense of high level agility (I’ve also built this into the movement rules). The Mustang Cavaliers were also designed for ground attack, so had lower powered engines without water injection or boost, so get a lower rating for energy compared to the F-51D’s.

The FG1-D’s of the FAS were, however, completely clapped out, so get a lower energy rating to reflect their age and relative underperformance. The C-47 is lifted straight from Desert Spitfires and I’ve also used the factors in those rules for the T-6 Texan, SNJ-4 and T-28A Trojan, as they were frequently flown on missions together and I wanted to make it possible for them to form a single mixed formation. The T-28A should really be a little more nippy but it makes sense to bundle them together as trainer aircraft rather then separating them out. The light aircraft are at the bottom of the table and are just taken straight from the core rules to keep things in balance.