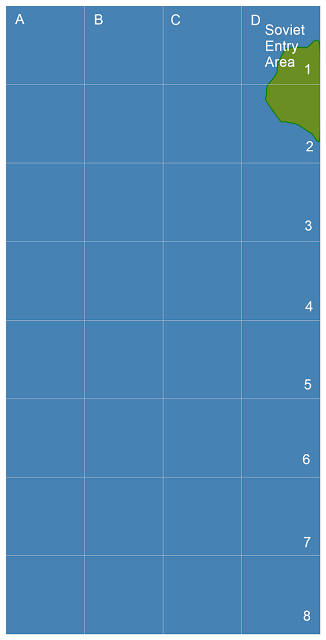 Welcome fellow Naval Gamers to the fourth and final instalment of our 1941 WW2 Baltic Campaign, it’s been an interesting journey with two draws and a German Victory in our first three games, how vital that loss would prove in this final game.

If you are new to the Campaign below are the links to the two previous games, I would suggest reading at least the first part as it contains the rules for submarines and mines.

In September 1941 the German Command was convinced that the city of Leningrad would soon be in their hands leaving the Baltic Fleet of the Soviet Navy, based on the nearby island of Kronstadt with a difficult choice. Scuttle the fleet, conduct a suicide attack on the German Coast or make a run for it to neutral Sweden.

To deny options 2 and 3 the Kreigsmarine sent a powerful task force including Tirpitz to the area to prevent any break out.

In reality a raid on Kronstadt by the Luftwaffe neutralised the fleet and no break out occurred, however I have blurred the lines a bit, bad weather has prevented the air attack and the Soviets are on the move.

This is a continuation of the previous three games and if you are following along you may have, due to losses in your games ended up with different fleet compositions.

Between games I use a very simple system to reflect damage repair, all damage and speed loss from the previous game is halved and for each turret / torpedo tube etc loss I roll a d6, 4-6 and the feature is restored, either repaired or not as badly damaged as first thought.

We played the game in a single day. 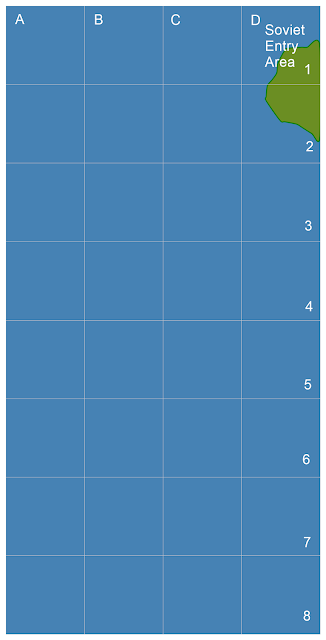 „After the costly yet relatively successful movement of our forces from Tallin to Leningrad things have continued to get worse, the port of Kronstadt just outside Leningrad is under threat and the Grand Soviet has been left with few choices.
We refuse to scuttle the fleet and a break out to the open sea would be suicide therefore it has been decided that the fleet will make for Sweden where it will be interned for use after the war.
The remaining ships of the Baltic Fleet will therefore leave Kronstadt at 0700 in three groups,
Group 1 contains two old Battleships and the older destroyers of the fleet, the brave sailors on these ships will slow down any German Naval units to allow Group 2 to escape. Battleship Murat and Battleship October Revolution, Norvik Destroyers, Lenin, Yakov Sverdlov and Karl Marx. Project 7 Destroyers Gnevnyi, Grozyashchi, Gordyi and Smetlivyi.
Group 2 contains the “modern” ships of the Fleet these are the ships we need to save, get them off table in square A5. The Heavy Cruiser Kirov, Destroyer Leader Minsk, Project 30 Destroyers Ognevoi and Stroniyi. Project 7U Destroyers Vlastny, Stoiky, Strogy and Storozhevoi.
Group 3 is a small sqn of 4 Destroyers who are to act as a bridge between the two forces and should act as a screen in any gap between Groups 1 and 2. 4 Project 7U Destroyers

You have 5 submarines to deploy which will be deployed randomly.
The three squares around the entrance to Kronstadt are mined everywhere else is free of mines, the mines are Russian and you may proceed as normal through those squares if you remain in a straight line, any turns will lead to a mine test.
You will receive some air cover and we have airfields still in our control in D1.
Roll 1d20 in the Air Phase you will receive 2 random Fighters on an 18, 2 Bombers on a 19 and 2 Torpedo Bombers with 2 Escorts on a 20.“ 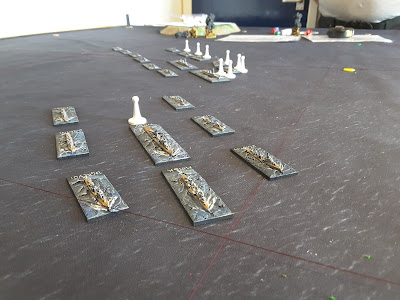 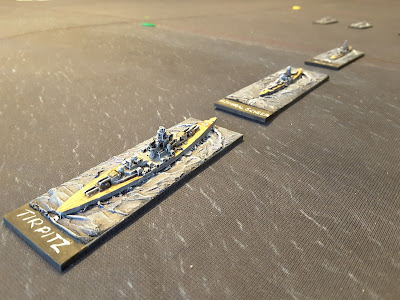 „Following the evacuation of Tallin our Panzers have continued to march onwards further and further into the Hinterland of the Bolsheviks. The Soviet Fleet is bottled up on the Naval Base of Kronstadt, an island just outside Lenningrad,
That city is now under attack and will no doubt fall to the mighty forces of the Reich. An attempt to destroy the fleet by the Luftwaffe has failed due to bad weather and our Intelligence services now believe that the Russian Fleet will attempt to break out towards Neutral Sweden.
You have at your command one of the most powerful Naval Fleets put together by the Reich including the newly commissioned Battleship Tirpitz. Should the Soviet attempt a break out your mission is to destroy the Fleet before it gets to Sweden.
Although the deep water will be free of mines the area around the port is likely to be extensively mined. Intelligence reports suggest that there is likely to be extensive Soviet Submarine activity.
It goes without saying that a badly damaged or sunk Bismark will see you in command of a horse drawn Latrine Unit on the Russian Front.
Your Forces are split into two,
Baltenflotte South contains the Light Cruisers Leipzig and Emden plus 4 older and smaller Destroyers (Z20, T4, T5 and T8)
Baltenflotte North contains Tirpitz, the PB Scheer, 2 Light Cruisers (Köln and Nürnberg) and 4 Narvik Destroyers (Z23, Z24, Z25 and Z26)
You will receive Luftwaffe support using normal rules. (Roll 1d20 in the air phase, 15 = 2 flights of fighters, 16 = 2 flights of fighters, 17 = 2 flights of Dive Bombers or 2 Flights of Torpedo Bombers, 18 = as 17 but 3 Flights, 19 = as 18 but add 2 flights of fighters and 20 = 3 Flights of Torpedo Bombers, 3 Flights of Dive Bombers and 3 Flights of Fighters.“

Marginal – Both Soviet BB sank and both Tirpitz and Scheer less than 50% damage.

To deploy the Soviet Submarines I placed 5 yellow counters in a bag (representing the submarines along with the a green counter for each of the remaining squares on the table. Each time a German ship entered a new square I drew a counter to determine if there was a sub in that square (see game 1 for very basic sub rules), the counter was placed in that square and a new counter drawn next time a ship enters a fresh square.

I reduced the visibility early in the game to about half max range of Tirpitz and gradually increased it during the game. 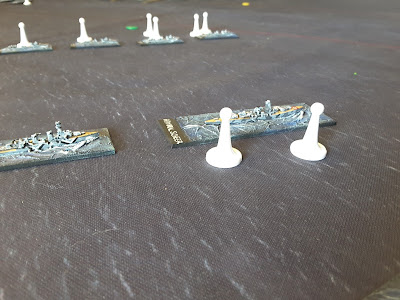 After the slow burn of game 3 this action was a lot more „explosive“ and reached a conclusion in less than a YG days play including a Fish and Chip break.

With Baltenflotte South set up closer to the Russian ships they were in action first. However is was the Russians who had the first opportunity of the game, the larger German ships entered into a square containing a Soviet Sub, the Captain of that vessel saw Scheer in his periscope first, a quick calculation to get a firing solution and the fish were away.

But it was a miss and the sub dived for cover.

With no other target in site the Soviet Battleships had opened up on the German Light Cruisers, Murat managed a hit on Leipzig, luckily for the crew it missed the ships vitals but left a bloody big hole in the superstructure. The other cruiser in the southern German group was not getting away with it either as Kirov had found the range on her and was causing damage. Emden in turn had picked on the Russian Destroyer Lenin taking out all three guns in one turn.

But the Russians were no having things their own way, the German Air Power rolls were spectacular for turns 6,7 and 8. A 19, 20 and 18 and these were to prove the vital dice of the game.

By turn 7 the visibility had increased and the Tirpitz had finally got sight of the leading elements of the Soviet Fleet. The Destroyer „Serdityi“ was the unlucky recipient of the Battleships first ever salvo in anger, a ranging shot landed on the side of one of the turrets, a 15″ shell and a destroyer don’t mix well !

It was also the turn of the first air attack on the Soviet fleet, October Revolution was the target but she escaped damage driving off one attack with her AA and avoiding the second.

Turn 8 saw visibility increase again and now all the ships were visible to each other. Scheer opened up on the Kirov punching a hole in her armoured belt, Tirpitz switched targets to the October Revolution whilst the Soviet Battleships continued to put large splashes around the Leipzig.

Turn 9 was the start of the end for the Russians, some excellent shooting from Scheer saw Kirov hit multiple times in the belt, losing 10 knots of speed. There was a glimmer of hope for the Soviets as Minsk sunk the German ship T4, but the firepower of the old battleships, although accurate, was unable to penetrate the heavy armour on Tirpitz.

It was the big German Air Strike which was the big moment in the turn, the previous attack had been seen off, but this time there were three times as many planes. October Revolution was hit by one torpedo (narrowly escaping another 2) reducing her top speed by 10 knots. Murat was even more badly damaged, 2 torpedoes and a bomb hit stopped the old girl dead in the water. 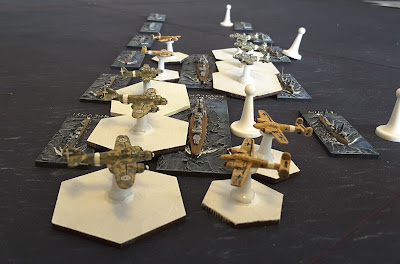 Turn 10 was no better for the Russians, although October Revolution finally found one of the few bits of Tirpitz she could damage and Murat caused some reasonable damage to Scheer.

However on the flip side Minsk was badly damaged from close range concentrated fire from German Light Cruisers. Kirov lost her battle with the Pocket Battleship and sank from the effect of cumulative damage from 11″ shells.

October Revolution felt the full force of the Tirpitz and her big guns, both rear turrets were taken out of action on the Revolution very quickly.

And that was the end, the Russian Battleships slowed by the previous air attack were easy prey for the German Destroyers and their Torpedoes. The game was up, with Kirov gone, the Russians had no chance of reaching any of their victory conditions and both Battleships were effectively dead in the water. The Soviets scuttled the Capital ships and those Destroyers who still could: turned for home at full speed. A straight up German Victory.

Well I have to say that we have had an enjoyable excursion in the Baltic and a theatre of operations that prior to me organising this I have to confess I knew little about.

It’s a tough job for the Russians, their ships are considerably less powerful than the Germans and to win as the Russians you certainly need a spot of luck, the loss of the Heavy Cruiser Maxim Gorky in game 2 was the turning point for me, that extra large ship in the final game could have given the Soviets a better chance.

The Germans weak spot is their lack of light forces, if the Russians had chipped away a couple more of the Destroyers it would restricted the offensive capability of the Kreigsmarine in the later games.

But often it comes down to luck, three big air support die rolls turned the final game. Without those attacks it would have been much harder for the German Fleet and would probably have led to the loss of the Scheer.

So that’s our 2017 Naval Campaign done. The Jutland Fleet will be on show in Derby. Next years campaign is yet to be decided but possibles are Aleutian Islands, Bismark or a WW1 Campaign. Thanks very much everyone who has followed our adventures.