7. Juli 2017Blogs INTComments: 0
Last Sunday saw the annual Wyvern Wargamers Summer all dayer….
One of the benefits of a club day is a chance to get all the toys out on a big table, something that you can’t manage at home or on a club night.
This outing saw the Russian’s holding a key village against an the advancing Japanese forces, the Russians out numbered the Japanese by around 12 points but were spread across a number of locations. They knew the general location of the Japanese attack but had to defend three key locations worth 10, 20 & 30 points – Only the Japanese player knew the value of each. 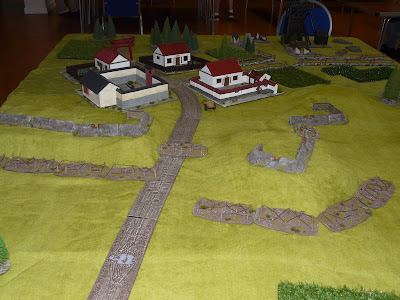 The Russians held a number of emplacements across the front of the village, with areas of dense barb wire blocking key routes to the village. 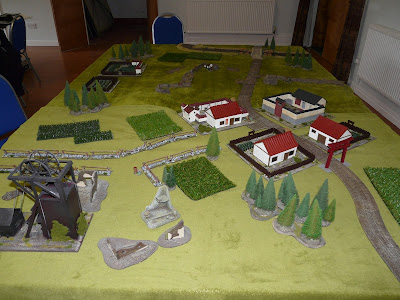 The view from the Russian lines 12′ of table to cross was no small task. 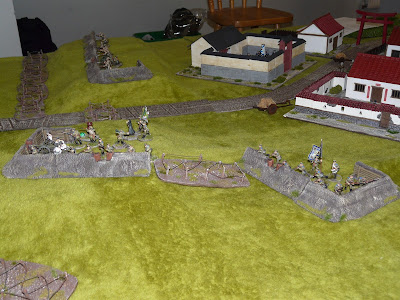 10.00am and the Russians deploy, filling the entrenchments with the first brigade containing three infantry units together with an MG Team and Artillery piece. 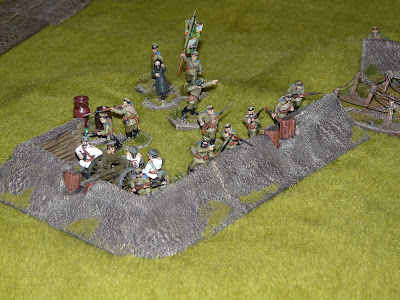 Rasputin reviews the troops in the central redoubt, the pots on the far left are one of the objective markers – but how much was it worth?
The Russians were taking no chances in losing it. 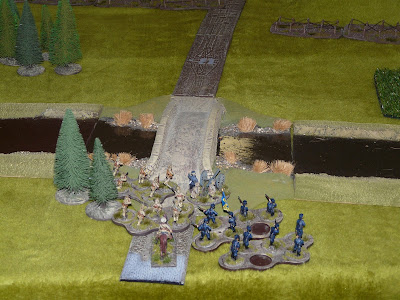 The Japanese enter the table together with a supporting unit of Chinese Infantry who must have been paid to fight on their behalf (OK I needed a few more troops.) 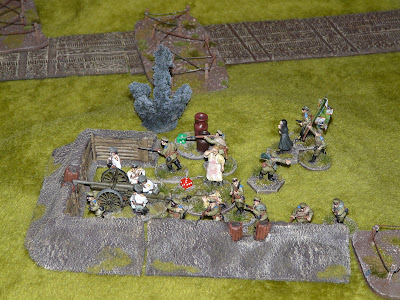 The ranges are to far for Rifle and Machine Gun fire so the Artillery let fly at each other. HE rounds pepper the entrenchments as the Japanese superior training takes it toll on the Russian defenders. 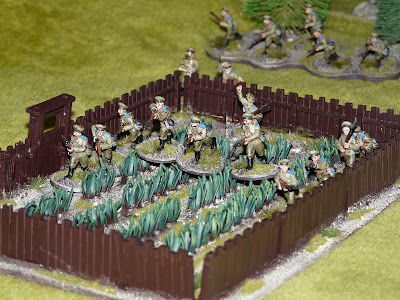 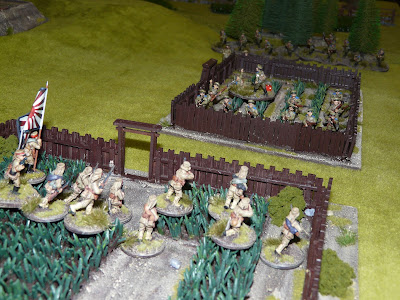 On the right flank the Japanese advance grinds to a halt as the Russians grab the first field. A single infantry section holds off three Japanese units who time after time fail to come under command. Japanese bodies start to mount up, casualties they can ill afford, being out numbered in the first place. 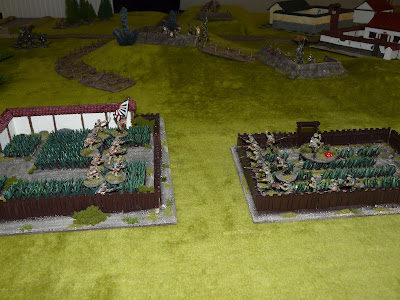 The stand off continues are the Japanese are repeatedly pinned. 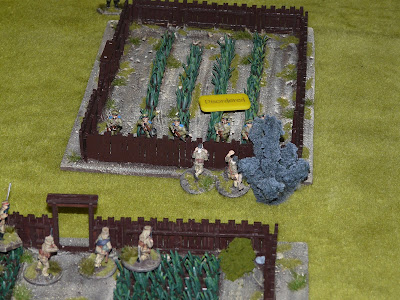 Eventually the deadlock is broken by a Japanese kamikaze attack which drives back the Russian defenders. 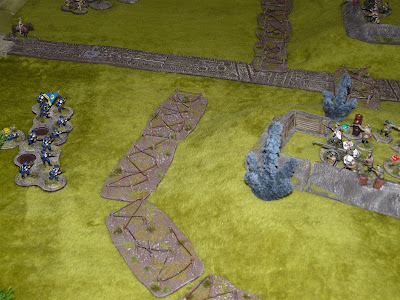 Meanwhile the Russian Gun is forced from it’s placement as the Chinese are pushed forward. 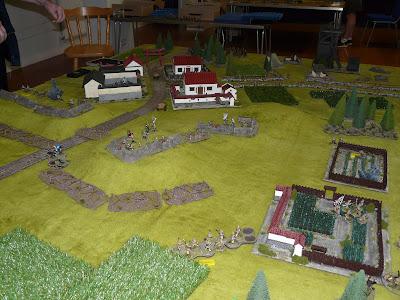 12.00pm and the Japanese are making slow progress on all fronts, time and again they force the Russians from the firing line each time they return. The Japanese are taking casualties at an unacceptable rate. The Russians still hold all objectives and have around 70% of their forces untouched. 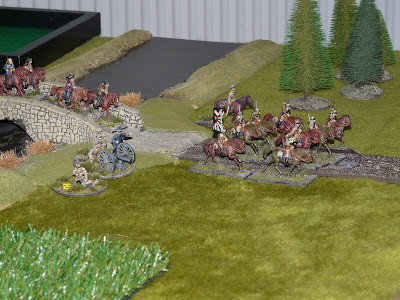 The Japanese bring on their cavalry brigade looking to crack the Russian lines. 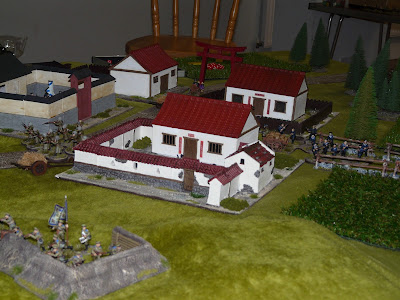 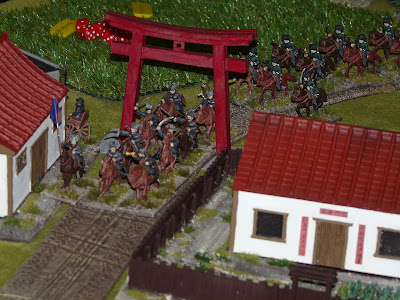 Seeing the Japanese commit the bulk of their forces the Russians bring forward the village garrison in the form of the Naval Brigade and Cavalry detachments. 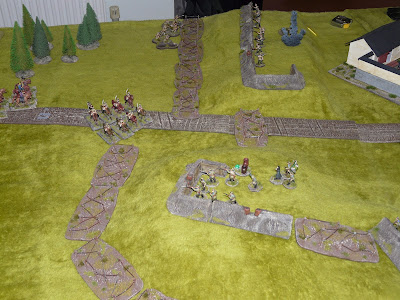 With the Russian Artillery destroyed the Japanese Cavalry advance into the road. 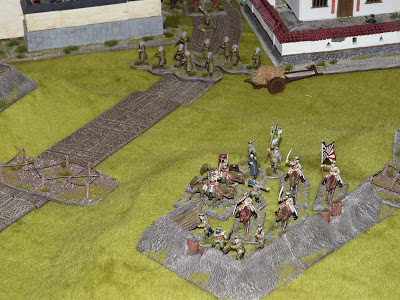 The Cavalry sweep round the depleted entrenchment killing the defenders and the Russian CinC who was commanding the troops on the earth works, things were looking up for the Japanese.
But the Russian Guard was advancing to bolster the defences and well aimed fire was to destroy the cavalry as an effective force. 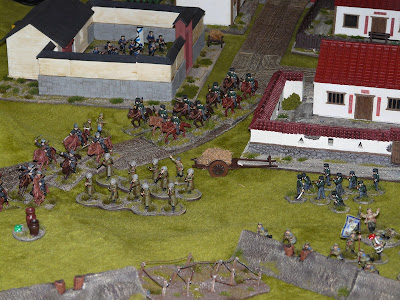 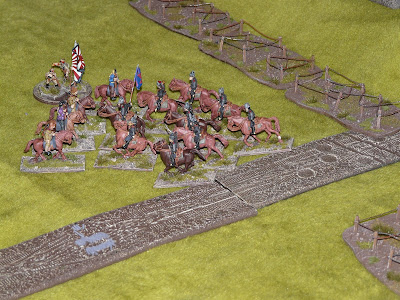 The Cossacks charge into the fray but are bested by the Irregular cavalry. We did not see that coming. 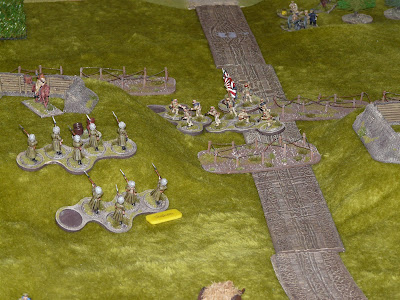 As the Russian Guard advance the Japanese cling to the rear of the hill contesting the objective marker. 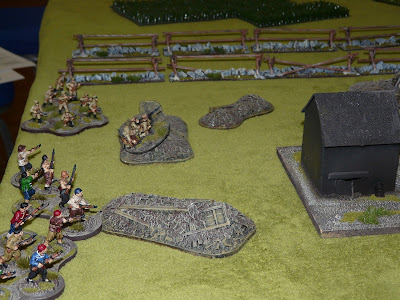 2.00pm and the Japanese commit their final units and in a sneaky move they have been quietly flanking the Russians forces and enter the table to the rear of the Russian lines and undefended objective markers behind the village. 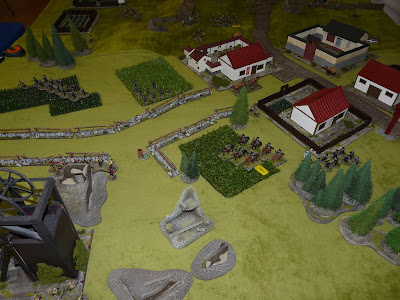 The Russians rush backwards but the clock is ticking the Chinese Irregulars are within 6″ if the 30 point objective and are holding at bay a number of Russian attackers. 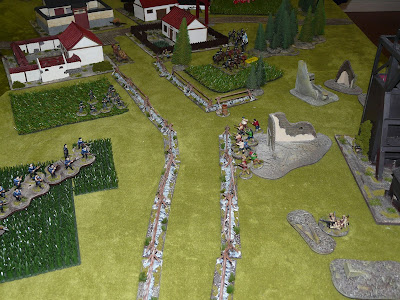 3.30pm and with the Russians unable to retake the 30 point marked and the 10 pointer on the trench lines still contested the Japanese have secured an unlikely victory.

As a fighting force they have been largely destroyed and another hour would have probably seen them lose the objectives but by delaying their forces to the final hours of the day they had finally managed to draw out the Russian defenders out before throwing in their last units.

A fantastic days gaming a few tweaks are needed next time around, perhaps weakening the Russian command scores and increasing the number of attackers as the emplacements were flaming hard to crack with limited artillery and Infantry. But MWWBK made for a slick game with plenty of toys on the table.
Roll on the next all dayer….

Elsewhere others made great use of the space and extra time.
A huge 15mm affair with 18′ of table in action. 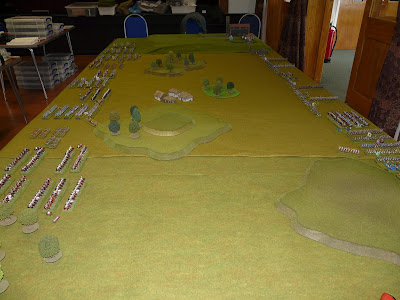 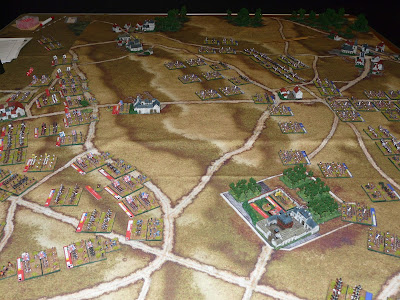 Right back to the brushes as I plan the next project.

« DARK AGE – The Forsaken forces of Saint JoanWelcome to the Jungle! »
➤
Anzeige: