3 A10 Cruisers, 2 Caunter Monkeys and a nice little Perry’s Portee 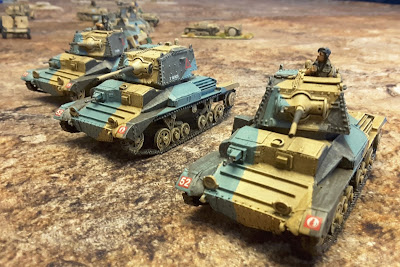 Prior to the start of our latest WW2 North Africa game I had a bit of a „mad minute“ clearing out all of my unpainted 28mm Desert stuff in one go. The to do box remained empty right up to the point that Blitzkrieg Miniatures started their half price tanks on Monday offer (1 different per week). The box is now overflowing with 4 Matildas, 5 Honeys and 6 PzIII. I now spend each Monday praying that the offer that week is one I don’t „need“.

So the first three models off the production line are these 3 A10 Cruisers. The tanks themselves are from Warlord Games as is the Tank Commander on your right, the other is a Perry Figure. These have appeared on the blog before in their sand basecoat, it’s taken a couple of years to get round to doing the Caunter and decals. 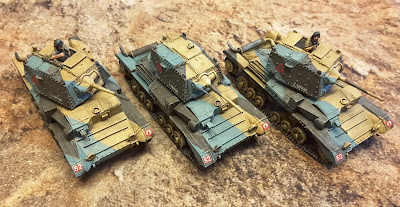 You can argue all day (you can, I’m happy with my choices) about the colours used for the scheme and people on the internet will. I know all about official colours, locally sourced colours, sun fade etc, etc. Having a family member (sadly no longer with us) who was an engineer in North Africa helped my choices. 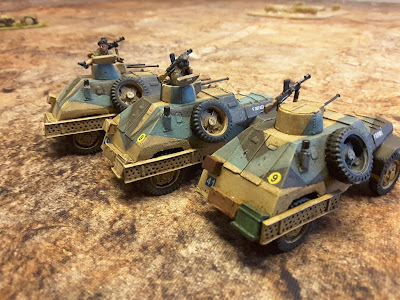 Next up are the Monkeys (Marmon Herringtons), I have owned one of these since the start of the Desert Project, purchased from Wargames Command Post. The models are Company B and with the dollar pound exchange have become quite expensive so I haven’t bothered adding to the collection. 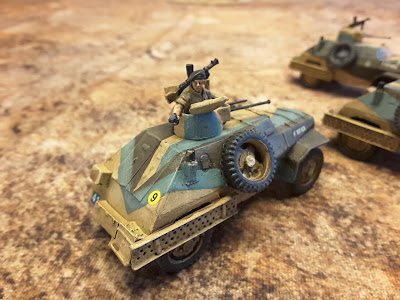 It was therefore with great joy that I stumbled across a Company B fire sale on eBay and managed to pick the two new models shown. I have added two Perry’s Commander figures, I particularly like the one leaning back firing his pistol which was a standing figure I cut in half. 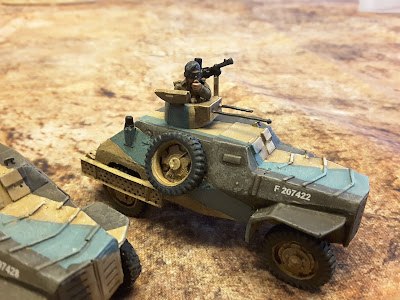 Next up in the 12 days is the Perry Miniatures Portee, what a great model this is, when I first opened the box I thought „what the….“ however it actually goes together really well, so long as you put the bits in, in the right order, that is. 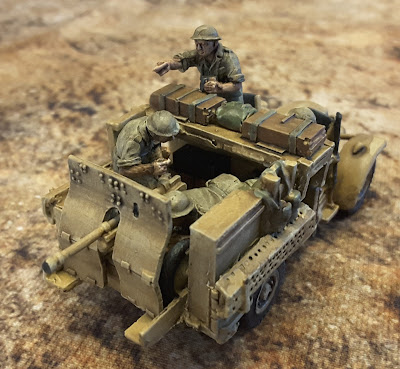 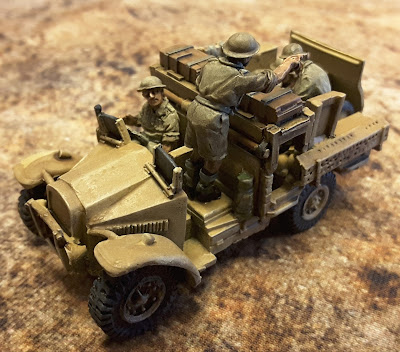 Most of these are already in action in the current game, next post will cover some Italian reinforcements.