A Baker Rifle for the House of War

Hey all!
Well, I FINALLY got a new piece for the House of War that I had been waiting for for almost a year…
… a Baker rifle!
Now, most of the folks reading this will likely know, but this is an English-made rifle that first really appeared in the Napoleonic Wars.  It is best known as the rifle of the fabled 95th and 60th Rifles, made famous by everyone’s favorite Napoleonic Era hero, Dick Sharpe.  I had really wanted one for quite some time… it is SUCH an attractive gun… compact, great brasswork, fantastic sword bayonet… and so, now I have one!
I’ll have photos of it on the wall when I get home and get it mounted.
What a treat!
Did some other fun stuff when I was picking it up… a few nice views, including this… 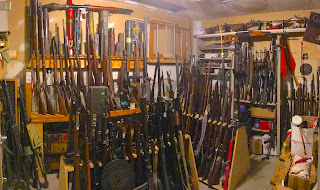 And sorry, I only filmed this one, so none of me just emptying the mag full auto!:)