A Broadside Blast from the Past 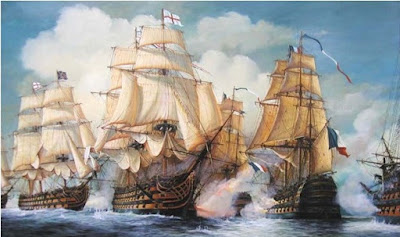 Way back in 2010, I bought a couple of starter packs of 1/2400th scale Tumbling Dice Napoleonic ships, with a view to starting a fleet action Napoleonic naval project, with the famous last words ‚Exactly when I get round to it all is a completely different question‘. Well, I think it’s about high time I did, even if it’s nearly a decade since my initial post:
http://jimswargamesworkbench.blogspot.com/2010/07/tumbling-dice-12400-napoleonics.html
I am much more confident now about the challenge of painting sails and masts on tiny model ships, having nearly completed my Victorian ironclad project, so I’m not too worried about all those fiddly bits. The Napoleonic model ships are, if anything, a more straightforward painting prospect, as there are no funnels, bridge walkways or ship’s boats to worry about.
On the other hand, I think I will need to bite the bullet and add some rigging, probably in the form of brush bristles and thin thread, which seem to be the usual method that’s used in 1/2400th scale. The plan will be to assemble, paint and organise two small squadrons, one for the Royal Navy and one for the French (plus ca change!). The rules will probably be A+A Games Grand Fleet Actions in the Age of Sail (unless David Manley publishes a suitable set of fast play rules in the interim?)
I’ll get started as soon as I’ve finished the last instalment of the 1/2400th scale ironclads, which isn’t the end of that project by any means as I still have the 1864 Prussian and Danish stuff to tackle, but is enough for a decent game nonetheless. I’ve decided to switch out some of the turret ships for three Prince Consort class broadside ironclads, as I thought they’d be more useful in the Royal Navy Black Battlefleet.

I’ll get cracking on those once the re-basing on the 1/3000th scale French ships is sorted, which should be the end of the weekend?