10. Januar 2019Hersteller ENComments: 0
In his first Flintloque hobby article for this year Andy takes a new tack and looks into using Alternative Armies 28mm high fantasy miniatures in his games of Flintloque. Namely the Crystal Elves and one of their most favoured packs the Assassins.  Read on for part one of this adventure.  If you missed any of the previous fifteen articles you can see them all for free on the blog by clicking on this TAG.  A variety of adventures in Flintloque mainly set in the Witchlands.  If you would like to Begin in Flintloque visit our website HERE for Escape the Dark Czar and free content and videos.  Enjoy!  GBS 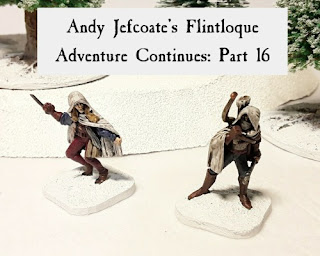 Using Crystal Elves in Flintloque
Part 1 – It’s a dirtyjob but someone has to do it
At the end of my last article I mentioned that I was looking for unusual figures to use in my scenarios.  While looking through the 28mm High Fantasy ranges on the Alternative Armies website, I had the idea of looking to see which Crystal Elf Empire figures would fit into my Flintloque sections either with or without conversion. Lets face it, the Crystal Elves were where it all began.
Although there were several possibilities I was initially drawn to set CE22 the Elf Assassins as I could immediately think of plenty of scenario options. 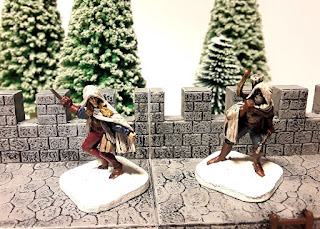 What is available and what did I get
There are five metal figures in this set that can be purchased together for 10GBP or individually for 2GBP. There is also the option to buy three packs at a 10% discount. All are great value as the castings are excellent. Miniature 01 is an Elf Assassin in cloak with Blade, 02 is a Female Elf Assassin with Knifes, 03 is a Masked Elf Assassin kneeling, 04 is an Elf Assassin plotting, and 05 is an Elf Assassin masked with Bow and Blade.
I have initially purchased models 01 and 05. Both are cloaked with their hoods up so look as though they are being furtive but this also fits in with the Witchlands and the severe cold. Both also have blades in their hands (or on their wrists) so are ready for action. I particularly liked the fact that model 05 has a bow so has a ranged weapon but one which is also a silent weapon, perfect for assassination!
I decided that both of these figures are great without conversion for my games, as if you need them to have other weapons in a particular scenario, especially pistols, then these could easily be hidden beneath their cloaks! However, if you wanted to do a conversion then figure 01 would be particularly good for this as the right hand could easily have a pistol or other single handed weapon such as a sword placed in it. Likewise figures 02 and 03 in the set also have hands away from their bodies and could be easily converted in a similar way. 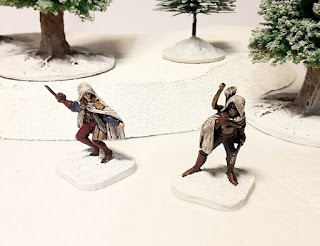 How did I paint the figures
I like the idea of assassins having individuality so they were painted differently but not flamboyantly as assassins wouldn’t want to stand out! I think that their clothing should be functional and look that way.
As my assassins were operating in the Witchlands their cloaks were painted white to blend with the snow,  but you could easily change this according to the terrain you are using them in, grey would be good for an urban setting or green within a forested or wilderness area. 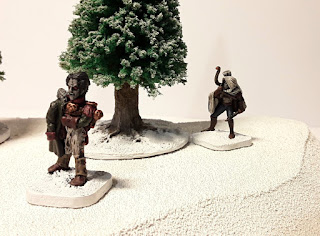 How have I used them in my games
I wanted there to be a clandestine organisation of hired killers who were beyond political allegiance and who will work for the highest bidder. No-one knows who they are or which races their members come from but for the right price then no-one is safe from the brothers and sisters of what is simply known as ‚The Order‘. One of my elf assassins is a Ferach Elf who has grown tired of the Ferach Empire, and the other is Dark Elf of Catalucia who lost his home, but both are now brothers of ‚The Order‘.
As I wanted the assassins to be key players in my games I’ve used them as Veteran Elves but you could make them legendary if using just one assassin. It also helps to give them multiple traits, so I usually give them 3 but there is no reason why they couldn’t be given more! If you like the idea of them using knives, why not use them as knives of Exquisite Quality so that they still get a +2 modifier in combat.
For the bow armed figure I’ve used the Othari rules for bows.  I particularly like the fact that there is no reload step so the bow can fire on each activation. This allows it to be fired twice per turn at different targets! 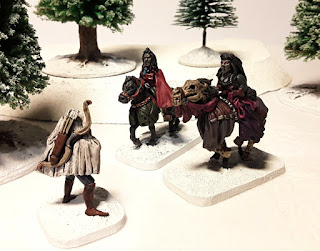 How do they fit in with my narrative
In my narrative Lady Lamia Wintermore has hired an assassin to remove Saindoux. Although a Vampyre is a superior killer she simply loves intrigue and enjoys the fact the it is an Elf that she has sent to kill an Elf.
Saindoux’s spies have told him what has happened so he has hired an assassin to help protect himself. Unfortunately they are assassins from the same order so where do their loyalties lie…
What’s next
I apologise that this article could be seen as darker than some of my others but as it deals with assassins I didn’t have a lot of choice. I do like Flintloque games to have humour though so feel free to lighten things a bit. Rather than being good at what they do, your assassins could be especially bad and given negative traits, or they could have signed up for a job but not actually want to hurt anyone.
I hope that you’ve enjoyed reading about my assassins and that I’ve inspired you to get some. As I’ve said before my favourite aspect of Flintloque is the scenarios you can create from the excellent and diverse range of figures available and these figures are great for that. In future articles I’ll let you know about some of the other miniatures I’ve used in my games.
Thank you for reading.
Andy