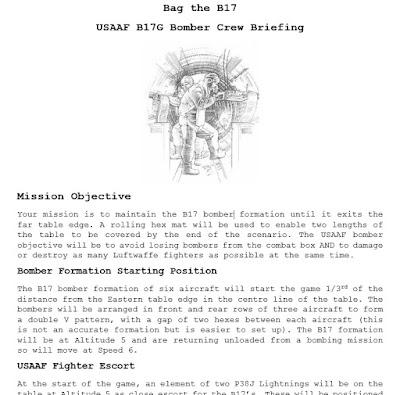 I’ve written up the briefing sheet for the B17G bomber players including the formation set up, gunnery rules and victory conditions, the only tricky bit being how to keep the aerial gunnery as streamlined as possible. In the end I decided to put two Air Gunners Fire cards into the deck, with each plane being able to fire into one arc per card, assuming the target is within the eight hex range.
Other bombers can chip into this by adding their +1 dice modifier to the overall fire factor, if they haven’t already fired on the card themselves. On the turn of the second card the same rules apply, again with each bomber only allowed to fire into one of the four firing arcs, in order to speed up gameplay and represent all the gunners banging away at a single target.
I think this should work fine, although it’s all a bot new to me, having only used Blenheims IV’s and Dornier 17’s until now, with their single turret or pintle mount rear arc fire factors. It’s no surprise that they called the B17 a Flying Fortress, as it is absolutely bristling with .50 cal machine guns and should be pretty good at defending itself from those nasty little fighters!