20. Januar 2020Blogs INTComments: 0
Just back from an awfully filthy snowy drive home from Barrie, and the home of The Mad Padre, where we had one of our irregularly scheduled gaming play dates and sleepovers.

On tap this weekend was our usual Lord of the Rings themed Dragon Rampant game. I brought 100 points of elves to face his legions of evil doom. A good 40+ of those points hadn’t been played with yet.

We used a book of scenarios from One Hour War Games and divided our armies into 3 roughly equal commands. My elf sorceress was holding a ridge while the king marched to her aid. It didn’t go well because you can buy a lot of goblins for 100 points….

So, I conceded the game, hoping that between nightfall and my sorceress, the remains of my army could extricate themselves. But we got a lot of troops onto a rather tight 6×3 dining room table. Mike did have a few traffic jams but that was mostly because of the scenario limiting where his troops came on.

Then after some corned beef sandwiches and a beer we set up a game of Longstreet with Mike’s 28mm ACW collection. 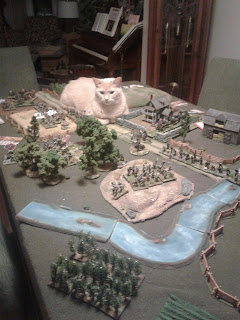 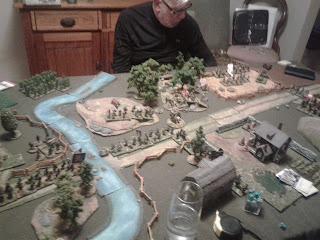 And that was that. A bit more catching up and some TV before bed and then we both  had an early start.