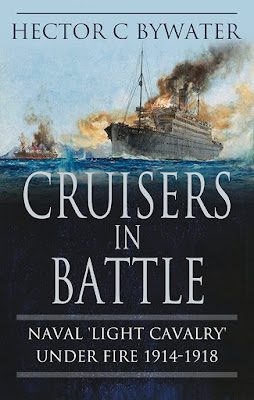 I’ve been reading this very interesting book over the last few days, even though the subject matter isn’t really on my current wargaming radar. I’ve read a couple of the author’s other naval historical and counter factual books, which were written in the interwar period, so I thought this would be a worthwhile addition. Despite its vintage, it is eighty one years since first publication, it is an exciting, well paced account of various WW1 cruiser actions, most of which will be familiar but one or two being relatively obscure.

There’s a lot of scenario potential here, not just for historical actions but also to be translated into other periods including the Victorian ironclad era, for example, by simply ‚camoflaguing‘ the opposing forces as earlier ships and shifting the scene of the action to similar but different locations. I remember reading an article in an early Miniature Wargames by either Paddy Griffith or Stuart Asquith, where the charge up San Juan Hill was converted into an ACW scenario titled the Battle of St James. A simple idea but it really works!