1. März 2018Hersteller ENComments: 0
Welcome to March and spring is sprunging..is that a word…well no matter because we begin the month with a customer request fulfilled. The miniatures from the 5024 Escape the Dark Czar beginners box set are now on the website for purchase on their own.  Saindoux Survivors and Preserovitchs Savant Zombie Infantry as packs or singles.  Go HERE for the Begin in Flintloque page for these as well as the game and other releases and miniatures.  Read on for more.
There are ten different miniatures in the beginners box set and we also have the new Zombie Horse for sale on its own which featured last week in the 55517 Spektrov Curiassiers.

5024A Saindoux Survivors
A Set of Four 28mm Resin Miniatures taken from 5024 Escape the Dark Czar.  The Mortal Characters. You can now purchase the mortal characters from the beginners box set on their own as a set of four or as singles.  They are supplied with a cartouche base and you can purchase them painted and base if you select that option.  Use the first image (A,B,C,D) to make your choice.  Full details in the 5024 Booklet. These are your core of a skirmish force.  Go HERE.
(A) General de Brigade Hugo Saindoux led the 5th Brigade of the 1er Armee du Norde until it was routed and all but destroyed. He did have a private staff of three just to cook his meals but they are gone and all Hugo has left is a family heirloom a cooking pot which he refuses to leave behind. He is beloved by those who follow his leadership
(B) Soldat Ayers Quinte de Toux.  The contrast between the general and the only other Elf in the small group of survivors could not be more stark. Only a boy Ayers joined the 9eme Regiment de Ligne after a recruiting party came to his village outside Lyonesse.  He was starving.
(C) Soldat Hulmutt Jucken is an embittered soul. The eighth in his mothers litter the world has not been kind to him. There was little to go around in the smokey hut that the pup called home and he could not wait to escape. The Army of the Dutchy of Neuterstadde was small just like the dutchy and it was called in its entirety for the Grande Armee du Norde.
(D) Captain Boell Umfrage. A soldier of some experience who had served with Marshal Sault in Catalucia before joining the Grande Armee du Norde and marching for the Witchlands. Skilled in hunting and in scouting Boell was in the process of ranging ahead of the rest of his regiment when the hammer of the Dark Czar’s ambush fell. He is the only survivor of a hundred Ogres who fought several hundred Zombies to a standstill. 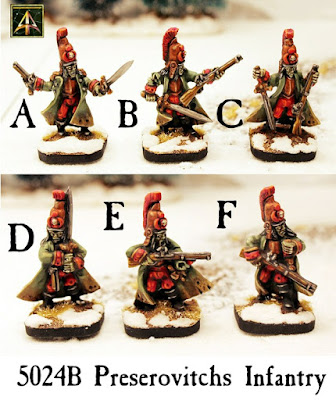 5024C Preserovitchs Savant Zombie Infantry
A Set of Six 28mm Resin Miniatures taken from 5024 Escape the Dark Czar.  The Undead Characters. You can now purchase the Undead characters from the beginners box set on their own as a set of six or as one random trooper of the five.  They are supplied with a cartouche base and you can purchase them painted and base if you select that option.  Use the first image (A,B,C,D etc) to make your choice.  Full details in the 5024 Booklet.  If you wish certain poses of trooper just tell us alongside your order and we will put those in for you.  We will put in a different trooper up to the five poses before repeating.  Go HERE.
A. Captain Preserovitch
B. Trooper Azimovo
C. Trooper Bolshov
D. Trooper Vodkavitch
E. Trooper Gurkinov
F. Trooper Yellagin 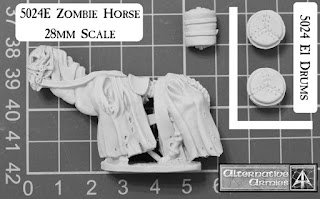 5024E Zombie Horse for most 28mm Scale Riders
This pack contains one 28mm scale resin Zombie Horse taken from 5024 Escape the Dark Czar sets and also used in 55517 Spektrov Curiassiers and our Fantasy Wraiths.  It will fit most 28mm riders and comes with a separate saddle roll as shown.  You can select this option or the ‚E1‘ option which also comes with two Kettle Drums as shown for a musician.  Go HERE.

So you can now get yourself more Zombies to make a full skirmish unit or additional survivors for your forces.  Remember there are free downloads and videos and scenarios for Escape the Dark Czar on the website and our blog HERE. 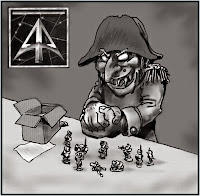 March 2018 is a big month at Alternative Armies and there is a lot of content and new releases coming including a new book, announcements and offers in 15mm and 28mm scale for many genres.  Spring Offensive is now under way and you best hang on for what is coming!
Thanks for Reading,
GBS