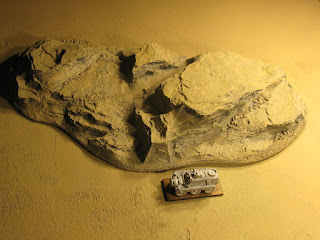 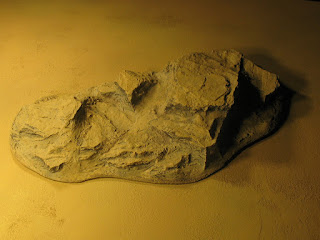 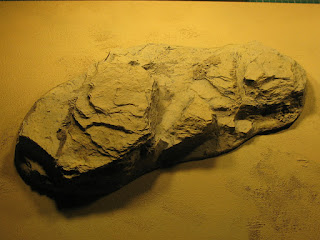 I had the option of scratch building some rocky hills for the Sandbox Skirmish project, or re-painting some existing terrain that I have in the big box of terrain stuff that I’ve accumulated over the years. I decided to go for the second option to save time, so have had a go at repainting a Battlefield in a Box hill in desert shades to match my terrain board.
This involved two wet and dry brushes of Homebase Cashmere emulsion, followed by a drybrush of Vallejo Tan Yellow, which is a good match for the desert scheme. The end result isn’t too bad but the resin terrain has warped slightly, probably due to the emulsion having a high water content, although not too much that it can’t be used.
I may well re-paint two or three of the other hills if the warping settles down a bit, or go back to the original plan and scratch build some hills out of foam or cork sheet. In the meantime, I’ve decided to get started on the figures and vehicles, leaving the assembled buildings and terrain pieces until a bit later in the project timetable, otherwise I’ll have terrain but no troops to deploy on it!