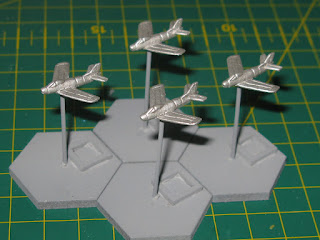 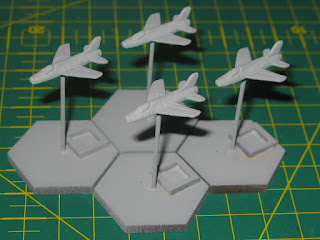 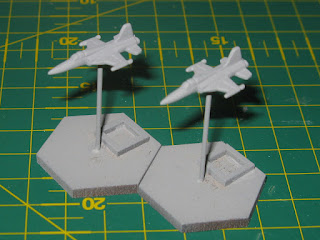 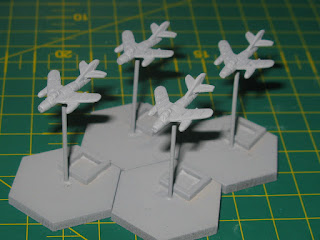 I had a day release from work today, which is very unusual but also very welcome, so I thought I’d get the extra bits based and undercoated for the Flashpoint Taiwan project. I was also planning to do some more painting of the B17’s for Bag the Hun but the garage is freezing, so that will have to wait. AS you can see, I now have four F-100 Super Sabres, two F5A Freedom Fighters, an S-2 Tracker and an RB-57D reconnaissance aircraft.
I also added four F-86F Sabres that I had magnet based and base coated for MiG Alley, only to realise that the fuselage stripe was vertical not diagonal, unlike all of the other Tumbling Dice Sabres that I’d based up. I’m not sure what happened here but I guess they were a sculpting mistake and I ended up with some of the wonky ones. Other than the incorrect stripe they’re absolutely fine.
I thought I’d make use of them anyway as they will be fine for the ROCAF and it will actually be easier to add the checkerboard decals to the fuselage stripe in the vertical. Job’s a good ‚un. To wrap things up and provide some opposition for the Sabres, I based up four MiG17’s for the PLAAF. I’m going to have a crack at painting the re-cycled F-86F Sabres this evening, if I can find the time.