Hello all! I’ve been off the blogosphere for a while, but actually hosted a Rebels and Patriots – French in Egypt game today. The game played out well enough and I learned a lot from several of the experienced players. I used the „Long Way From Home“ scenario, which had the French needing to move off the table diagonally from one corner to the other.

Here’s the view of the French units prior to the start of the game. 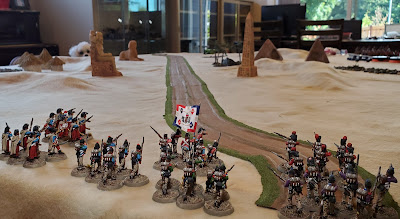 One thing I modified before starting the game was shortening the distance for the French. Having only played Rebels and Patriots a couple of times in the distant past, I had set up the table thinking of the longer shooting ranges of Bolt Action and the sweeping movements of Black Powder. The table size was 7.5′ X 6′. I could’ve used just a 6′ X 5′ area more effectively. Anyway, we moved up the starting point for the French and also shortened their ending point. We also grouped the figures into 12-man units (except for one French Grenadier unit) from the 6-man units here. We played 12 turns and the French were victorious by destroying most of the Ottoman army – although they were still a little short of reaching their end point. Here are some images below from the game. 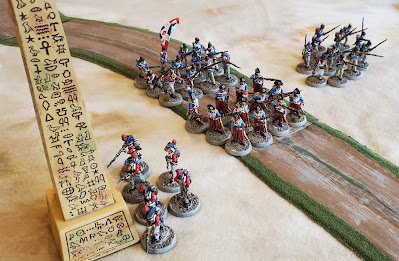 The one small French unit of Grenadiers taking cover behind an obelisk. Dismounted French Dromedary and infantry behind them. All of the Egyptian terrain are aquarium ornaments. 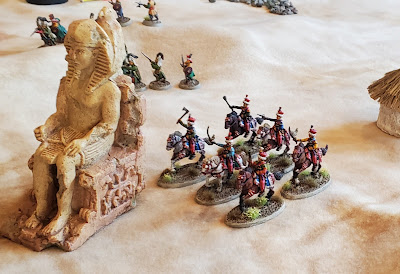 Mameluke cavalry moving into position to stop the French advance. 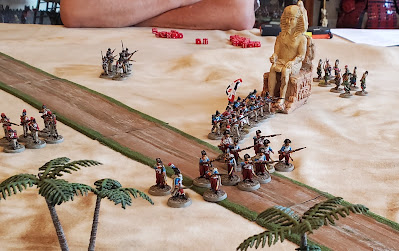 French pouring devastating musket fire into the Ottomans. The Ottomans had bad die rolls, including a few activation failures. One rolling snake eyes followed by a one. This had one of their units firing into a friendly unit and causing casualties and disorder. 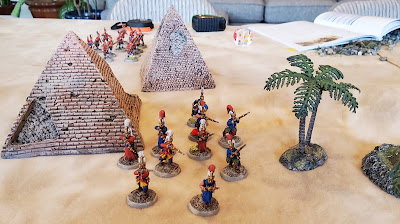 A unit of Janissaries moving through cover. Tufekci troops in the background. 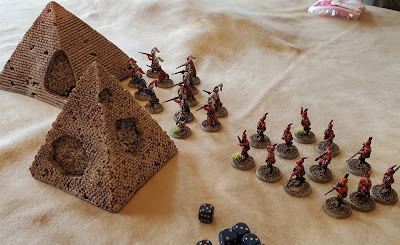 Tufekci and Janissaries maneuvering around pyramids. 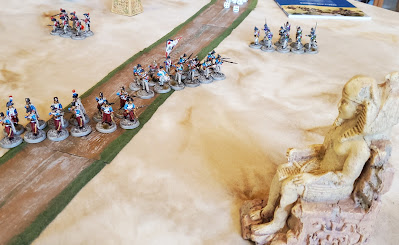 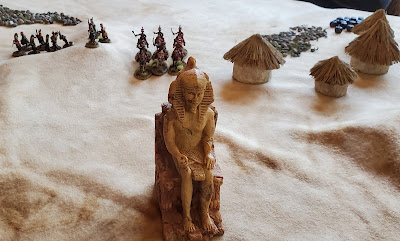 A long-forgotten pharaoh sits in silence while French invaders wreak havoc in his lands.

It’s been a while since I’ve posted, but summer had me doing things away from the gaming and painting table – one was visit to my youngest son currently stationed at Fort Hood. I had to take a picture next to the post’s mascot – the Grim Reaper. It’s really strange that a major US Army base chose this, but here it stands in front of the III Corps headquarters. 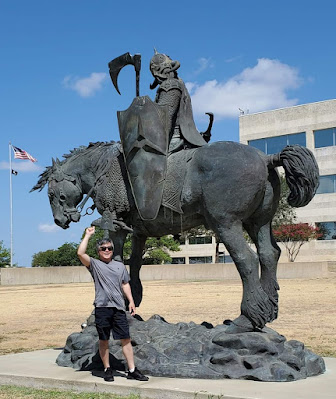 Well, so much for now, and until next time, wishing you all a great summer.