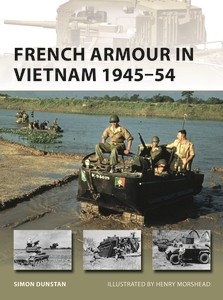 This is out in February and I think I might pre-order a copy. Whatever you think of the vagaries of the Osprey Publishing series, the Vanguard titles are some of the better ones, hopefully including this book. It’s not going to be a comprehensive study at only 48 pages but if the colour plates are up to scratch, it will be a useful painting guide for my 15mm and 10mm French AFV’s. This is what the blurb says:
French experience with armour in Indo-China dated back to 1919, when it sent FT-17s to the colony, followed by a variety of armoured cars. After World War II, French troops were equipped with a motley collection of American and cast-off British equipment until the outbreak of war in Korea saw an increase in military aid. This included large numbers of the M24 Chaffee light tank, along with amphibious vehicles such as the M29C Weasel and LVT4 Buffalo, to conduct operations in coastal and inland areas that the Viet Minh had previously thought immune to attack. France’s armour was a key part of the battle against the Viet Minh right up until the last stand at Dien Bien Phu.
I like the emphasis on the amphibious AFV’s but I’m also interested in the earlier cast off and obsolete vehicles as well. It’s really good to see at least one more Osprey covering the French Indochina conflict, otherwise I have to go back to my French language references and the internet for ideas.