Frozen Horsemeat – Skirmishing with the Muscovites

21. Juli 2017Blogs DEComments: 0
Last saturday I was able to attend our local wargaming day after many months of absence. As agreed before, we had mustered our forces for a Skirmish game of By Fire and Sword.

My Muscovite Skirmish force found itself in conflict with a large horde of Ukrainian Cossacks with a mix of Infantry ranging from rabble to registered molotsoi.

We fought the Foraging scenario, the stronger player (Cossacks) had to defend the loot (Frozen Horsemeat) he found in the villages against the smaller force (Muscovy).  The Cossacks started the game split up between the two build up areas which enabled the muscovites to focus on one flank to even the odds. 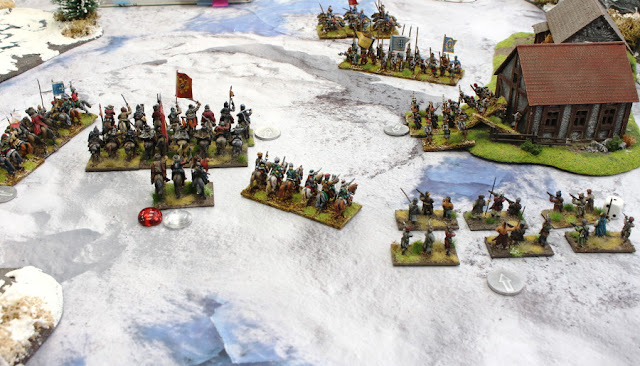 Muscovy deployed all troops on the right flank, hoping to crush at least one half of the enemy force while their commander was on the other side of the battlefield.
Above you can see the Muscovite Servant Cossacks perparing to storm the village defended by a lot of Cossacks.

A skirmish Sotnia was sent out to block and drive off the approaching commander.  Unfortunately they ended up charging the large group of cosscaks on the far edge in the flank, tempted by the opportunity, but ultimately failing.
However, they succeeded in their mission to hold off the enemy commander for a long time… 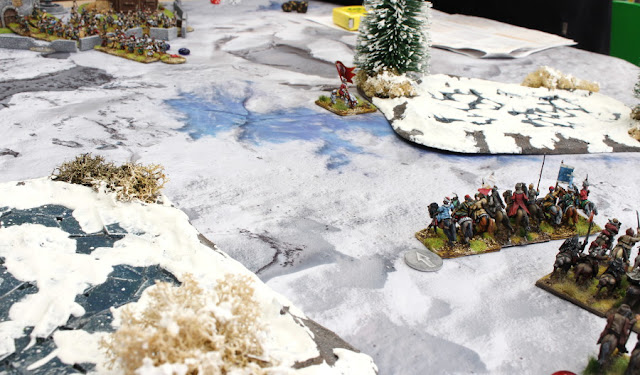 On the right flank, the battle commenced with several waves of indecisive charges of Muscovite Servant Cossacks against their free brethren in the village.
The Russian Cavalry rode close to the spearmen and let lose several volleys of close range fire. 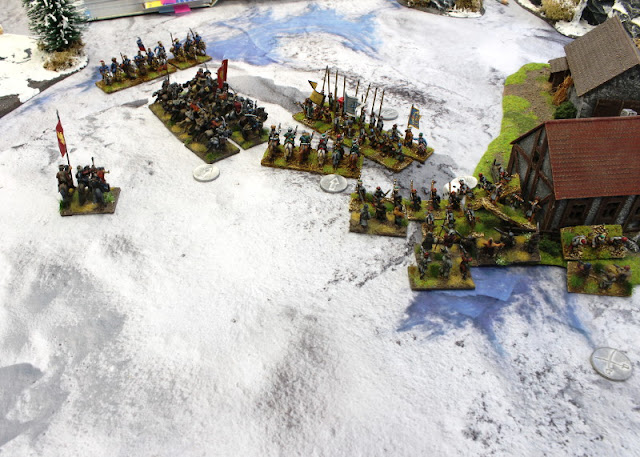 After several failed attempts of the servant cossacks to storm the village and a long period of indecisive shooting of the horsemen against the spear-armed cossacks defending the rear of the village, a charge was ordered and the spearmen broke. 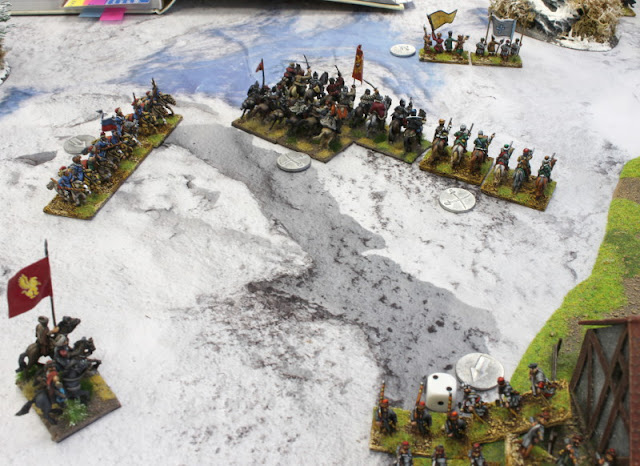 However, there was still one unit of cossacks stubbornly holding on to the village.
Just before the Muscovite Boyars and Reiter managed to crush the Cossack spearmen, their Infantry became exhausted and disorganized after several failed attempts to clear the houses.

On the left flank, the Skirmish sotnia had now charged and broke against the much larger cossack unit. The commander was free to ride to the part of the battlefield were the main action was raging and coordinated the defense. 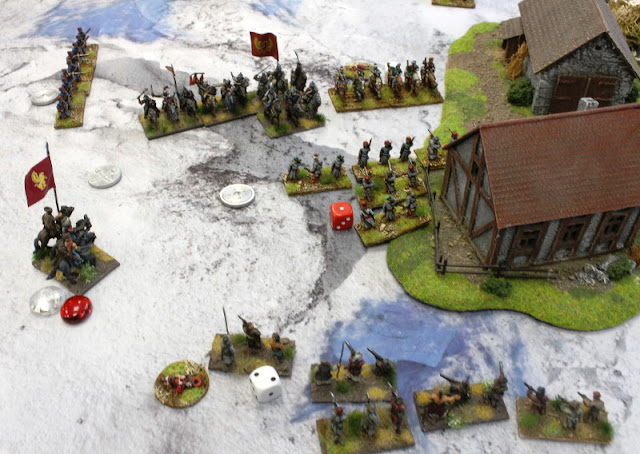 The Russian cavalry tried twice to drive of the defenders, but without help of the infantry (still disorganized) they failed to complete their task.

In the end, after a futile attempt to disrupt the enemy foraging party, the Ukrainians got to take home the frozen horsemeat, resulting in a major victory for the Cossacks.