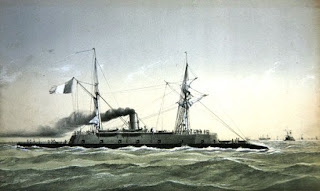 The French casemate ironclad ram, Rochambeau, has slipped through the naval blockade of Brest by the Royal Navy using a heavy fog to conceal her escape. With the broadside ironclad Couronne as escort, the Rochambeau has been intercepting and sinking British merchant shipping, spreading terror and destruction far and wide across the North Atlantic. In response, the Royal Navy has mobilised it’s fastest and most powerful ironclads of the Black Battlefleet, to hunt down and sink the dastardly commerce raider.

This is a ‚What if?‘ scenario for Broadside and Ram, with the French objective being to escape the clutches of the Royal Navy squadron sent to intercept it, somewhere in the North West Atlantic. The French start in the right hand corner of the 4′ x 4′ table and must exit via the 6′ square box in the bottom left hand corner. The Royal Navy deploy in the bottom right hand corner and must prevent the French from escaping, preferably by sinking the Rochambeau. The French deploy and move first. 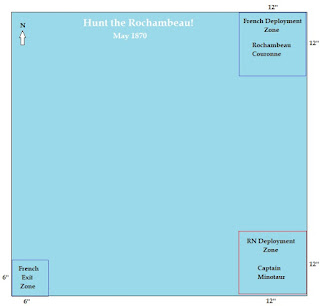 The French have a weaker squadron and less well armoured ships than the British, with a total of 24 to 29 points, but the Royal Navy does have one key weakness. The turrets of HMS Captain are prone to jamming, as she was undergoing sea trials at the time and had yet to fully run in her design, so on a firing roll of 1, a turret will be jammed and inoperable. This will give a -2 modifier to firing but may be repaired by expending 2AP in the Repair Phase. The Rochambeau also has a slightly uprated AF due to being re-fitted with an additional pivot mounted 9.4“ bow chaser in 1868. 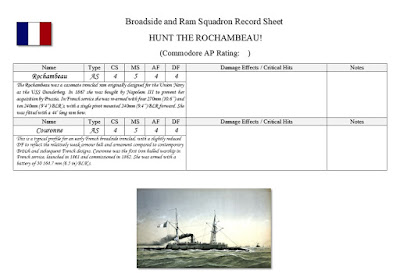 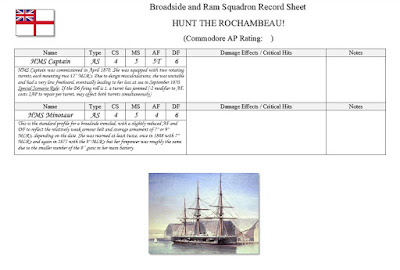 At the start of the game, both sides should roll a D6 to determine the AP dice modifier for their respective squadron commanders (1 = -1 / 2-3 = 0 / 4-5 = +1 / 6 = +2). The British flagship is HMS Minotaur and the French flagship is Rochambeau. To win the game, the French must get the Rochambeau off the table via the exit box either unharmed, damaged or silenced. If the Rochambeau is crippled and unable to effect repairs or is shattered, the Royal Navy will win.
In the unlikely event that either side loses both of its ironclads shattered, the opposition will win a famous victory and may open a nice bottle of champagne / port for a celebratory snifter.
*Any resemblance to a certain naval engagement in May 1941 is entirely co-incidental, of course.