It’s time to show some results from my latest side project. Kings of War mummies! Some time ago, my friend Robert from tabletop-paintworks.de (German language) convinced me to start another game system: Kings of War. At first, I hesitated, because I was not keen on painting a lot of models. But after some time, I agreed to join the project. Our goal is to paint 300 points every month. We thought that the goal of 300 points is enough to make serious progress, while it’s still achievable.

Why Kings of War?

Personally, I am more a skirmish player. I like fewer models, a lot of terrain and scenarios of high quality. But right after starting the hobby, I planned to build a vampire counts army for Warhammer Fantasy. But because I lack the time and the players, I abandoned the project and sold my stuff. But the idea lives on. So it was obvious that I had to choose the Undead as my army for Kings of War. 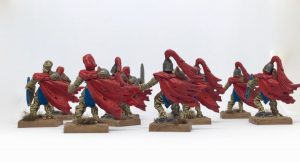 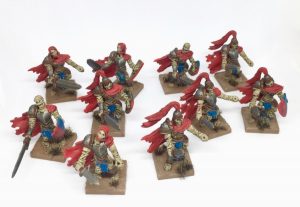 Due to a lack of time and a lot of miniatures to paint I chose a rather simple paint scheme. But nonetheless, I like the result. Gamewise the mummies are a good choice. They hit pretty hard and can take a few hits as well. After playing four games I am still new to Kings of War, so take my advice with a grain of salt.

I hope you like the mummies. Maybe I will use them also for a scenario in my upcoming fantasy campaign for Pulp Alley. But due to their desert setting, they need a proper location. Perhaps later in the campaign, the adventurers will travel to another continent with a more desert style theme. But for my Undead army, the next units will be Zombies, Ghouls and Skeletons. So take care and have a nice day.

The post Kings of War – Mummies appeared first on GlueandDice.com.

« Some other photos of the guns I checked out…[U-Wing] Schwenkflügel »
➤
Anzeige: