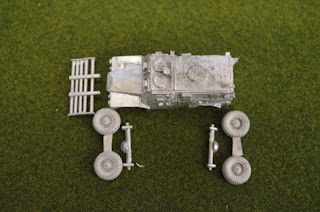 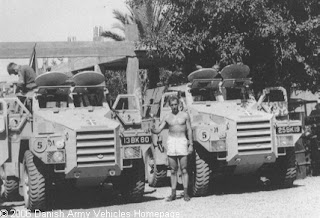 I got an email from QRF today with a code for a 10% discount, so took a look at the Post War British section of their web shop with a view to getting a couple more vehicles for the Sandbox Skirmish platoon to patrol around in. I already have some Saracens, a Ferret, an LWB Landrover and a couple of Bedford lorries, so this time I have ordered a couple of Humber Pigs (cool!) and an SWB Landrover for urban sweeps in the mean streets of down town El Kebab, or whatever it ends up being called?
I also spotted a 1/100the scale resin BAC Strikemaster model for only £7.50, so that got added to the shopping basket as well. It will look pretty good when I add a flight stand and some air to ground rockets or gun pods, even if it will only play a peripheral role as table decoration for any skirmish scenario. I also thought it could be used as a scenario objective, in the old ‚rescue the RAF pilot shot down in the tribal area‘ set up, although it would be a shame just to have it in a crashed condition.