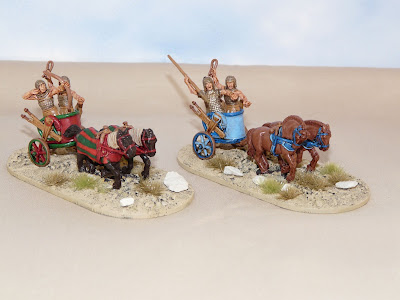 Finally after a couple of weeks the Egyptian chariots roll off the production line.

I need to add shields but these count as done. Slightly inferior to their Hittite counterparts with only two crew rather than three. These are a great addition to the Egyptian forces, I think another 2-4 should be enough to give a true feel to the period. As usual great castings from the Foundry guys… others are available, but I like how sturdy these are….

I opted for a similar colour scheme for each model, There are mixed views on the correct colour but this feels right for what I am looking to achieve.
I adapted the Infamy Infamy rules to reflect the difference in use within bronze age armies. The chariot for the Hittites was a battle wagon designed to break the enemy ranks and ride down the enemy. Whilst the Egyptian variant was more of a mobile firing platform.
Within Infamy warriors are typically deposited before charging in on foot, but in my variant warriors will not leave to dismount from the chariots but will fight on board in hand to hand combat. With each chariot recording 8 casualty points.

Chariots will withdraw 2″ for any point of shock on the group irrespective of the result of one round of combat.

If an enemy warrior or cavalry/chariot group moves within 4″ of a group of warriors in chariots on the flank or rear the chariots may choose to evade.

Chariots may not enter broken ground.

Chariots against Open Order Foot receive a +2 in combat

They may carry a group of Chariot Runners who can deploy anywhere up to the limit of the chariots movement. 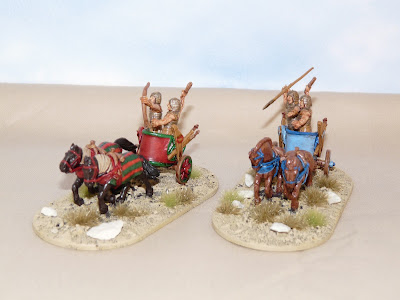 The Egyptian chariots were crewed by a driver (Kedjen) and a warrior (Seneni). Whilst not as well armoured as their Hittite counterparts, the horses were protected with textile armour and the warriors were usually armoured, with the driver armed with a shield… or will be when I finish them. 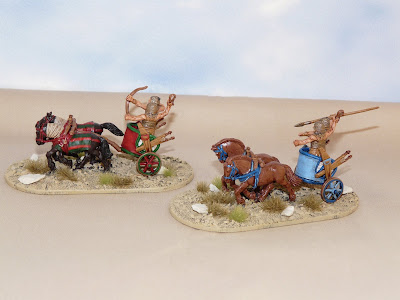 Unlike the Hittites that I have armed with a heavy throwing spear, I opted for bow for the Egyptians, whilst armed with both composite bow and javelin, I figured bow better describes the doctrine of a missile platform rather than an assault weapon as with the Hittites.
I have not included heavy chariots but have added the elite variant of the Ne’Arin or ‚Young Warriors‘ these were an elite regiment that saved Ramesses at the Battle of Kadesh. There are suggestions that they where drawn from the Amurru region, which would give me the excuse to use some of Foundry’s Canaanite chariots.
The stats for Infamy Infamy.