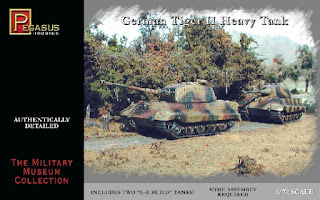 I wanted to have at least one Tiger II in the late war German tank arsenal and was resigned to gluing together the Italeri re-release of the old Esci kit, with all it’s numerous road wheels and individual track link sections, when I stumbled across the Pegasus EZ-Build version. This wasn’t a cheap kit but, as you get two tanks in the box, it wasn’t that bad and cheaper than a resin or metal equivalent.
The kit plastic is that shiny slightly soapy looking stuff but the detail looks fine enough and the kit has the advantage of integral track units with add on outer road wheels. I think I’ll only put one of them together for the moment and paint it up in full but basic winter white camouflage, rather than attempt any three tone wavy edge nonsense. A matt grey basecoat should be a good starting point with some judicious wet and dry brushing to follow up.

I may even assemble one tomorrow as I’m off work but also want to get the second Armourfast Panther built so that I can paint it alongside the Jagdpanther and Panther that I’ve already assembled. I am slowly creating a mini Blitzkrieg of quick build plastic base coated armour on the shelf above my workbench but there is some logic in my madness, as I’m going to do a production line in tank painting over the holidays.