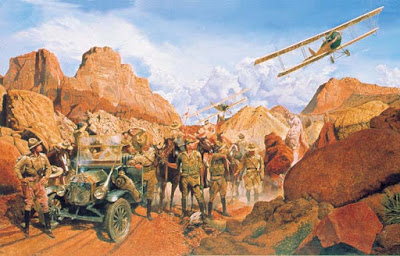 I’ve been reading through the Fistful of Lead: Viva la Revolucion! supplement, with a focus on the Pancho Villa Expedition scenarios which are included as the last two out of the ten in the set. The first of these is based on the infamous raid by Pancho Villa on Columbus, New Mexico, while the second features the raid by Patton on the San Miguelito ranch to capture Julio Cardenas, although he was killed in the firefight that followed. These are both cracking little scenarios, with only a six to ten figures aside, so more than feasible in 20mm. 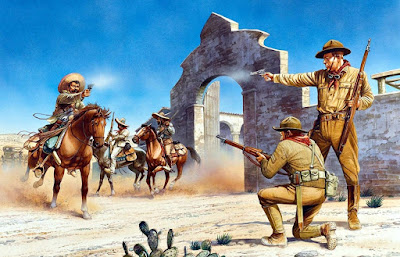 However, I have enough 20mm American Expeditionary Force figures and Villistas to expand the size of scenarios to twenty figures or so per side, which opens up all sorts of potential skirmish gaming possibilities. I originally bought two of the Shellhole Scenics army packs, which include about thirty infantry, nine mounted and dismounted cavalry or a couple of vehicles, together with a couple of machine guns or artillery pieces each. This means that I have more than enough figures for some decent platoon level skirmish games, with a few motorcycles and a Jeffrey Quad armoured car too. 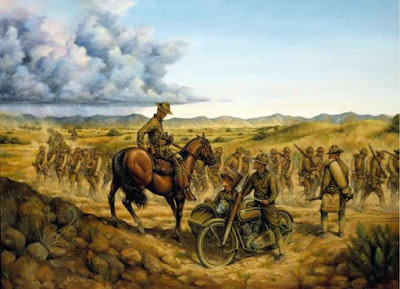 All I need are some buildings, which I can get from the Blotz Middle Eastern adobe range in 20mm, and some railway track and a train, which I can source via eBay from the old Triang range. The Shellhole Scenics exhibition game featured a very nice train using the same OO gauge locomotive, box cars and caboose, which are readily available for peanuts if you hunt about a bit. I’ve also got an old 1/72nd scale Curtiss Jenny model kit that would be ideal for scouting ahead of an American patrol or supply column. I have all the terrain I need otherwise already.
This could be a lot of fun…if I ever get round to doing it!?