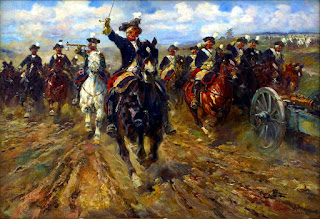 Here is a nice picture of some Prussian Horse Artillery that I found on Pinterest. I have no idea how the Prussians employed horse artillery during the Seven Years War, but evidently they were not very successful because the first battery was captured at Kunersdorf and the second at Maxen, both occurring in 1759.
Kronoskaf-Prussian Horse Artillery
The uniform in the picture appears to be post SYW due to the hat plumes, which were only added after the war.