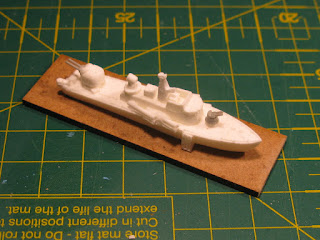 I spent half the morning in a futile attempt to kit bash a 1/700th scale Storyyi class destroyer from an old Tamiya Narvik, before giving up when I realised it wouldn’t work.
Drat, Drat and Double Drat!
To save something from the wreckage I decided to assemble a PT Dockyard resin model of a Turya class FAC (H), which I had originally decided to leave well alone. It went together quite easily, much to my surprise, although I did replace some bits with plastic kit parts including a new forward deck mounted twin cannon mounting, albeit an incorrect one.
This wraps up the Soviet-backed FAC flotilla but I can’t start painting it yet as the temperature in the garage is still way to low for spray undercoating. Never mind, as I have the MiG Alley planes to finish in the meantime and also plan to base some more 1/600th aircraft, either for the Flashpoint Baltic project or for my projected Cold War Soviets.