Today it is 2 month untill Dan Mersey´s and My wargaming rules Rebels and Patriots will be published by Osprey Games, 24 January 2019. I thought it would be good to, while we eagerly await the release, post some blogpost about the rules.

This first one are purely optional as it revolves around our sugested basing in the rules, the 1,2,3-Basing. What bases you have your minis on dosen´t really mater much in regards of the rules, as long as both sides have more or less the same it will work fine, but I have come to the conclussion that I prefer my 1,2,3-Basing and I hope more wargamers will see the benefits with it.

I thought it was good to re-post the information for all you that might want to base your minis for Rebels and Patriots in this way. My main reason to use 1,2,3-Basing was to force my co-players not to line up the minis in neat formations as it took away the skirmish feel to the games we played.

So I started to test aroud to base several minis on the the same base and still keep some singlebased for „change“, after some testing with number of minis and base sizes I ended up with the 1,2,3-Basing you now can see me using it on more or less all my miniature projects.

The 1,2,3-Basing gives me good looking units while retaining the feel of skirmish gaming, as well as speeding things along with fewer bases to move and with the possibility to remove casualties, sounds like a winning concept 😉

Base sizes I recomend:

Using this basing standard means that you easily group the bases together in the groupsizes used in Rebels and Patriots, 6, 12 or 18 models depending on troop type and still remove casualties with ease, if/when you need to…

If you have really bulky minis you might wan´t to add 5-10 mm on the communal bases to fit all minis in, but I rather have them close toghether (maybe cutting some off/adjusting the models base) than increase the base size.

You can also mfind the first review of Rebels and Patriots, by Guy at Wargamings Soldiers and Strategy magazine. 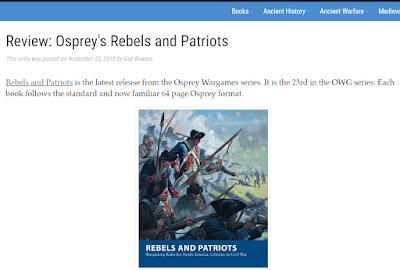