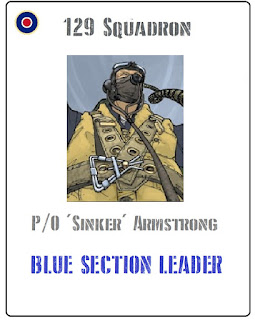 One key element of the Bag the Hun Lard Day scenario is the eponymous hero, Pilot Officer ‚Sinker‘ Armstrong. Although only a Veteran pilot and section leader, P/O Armstrong has to make more than an appearance in the scenario if it is to deserve it’s title of ‚Sinker Saves The Day‘. To make this happen, the scenario objectives and victory points will put a premium on any kills or damage results that P/O Armstrong can inflict, but he also will have a special Pilot Characteristic to give him a better chance of surviving and an incentive to get stuck into the action.
At the moment, this will be a bonus for situational awareness, a ‚Sixth Sense‘ or as I may term it using contemporary RAF slang a ‚Ring Twitch‘ (it’s a Too Fat Lardies rule set after all). This will give a -2 penalty for any pilot trying to ‚Get on the Tail‘ or ‚Stay on the Tail‘, making it the equivalent of a Junior Ace rating. I am also thinking of giving P/O Armstrong a bonus for his aggressive flying, possibly titled ‚All Guns Blazing‘ or similar, giving a +1 Firing Adjuster for air to air gunnery. However, I’m not sure if two Personal Characteristics isn’t a bit of overkill, so I may just stick to the one?