This Kickstarter is a little on the late side but I was heartened to received the following update for Star Eagles.

Sorry for the slow rate of updates.  I know it has been frustrating for you all waiting for some news on the project.   Not wanting to make excuses, but my day job decided I was not working hard enough and has been sending me all over Asia for the past few months to deal with manufacturing problems. Things have final returned to normal and I can get back to focusing on finishing this project.  Normaly I am very responsive on my KS projects and I am sorry for the lack of more frequent updates.
Production of the minis will begin this month, I have finalized the scaling of most of the ships and will be sending them off for production later this week. Based on where I am now, I expect the revised timeline is to have the KS shipping in later part of December.
I am also working with Litko to have the move templates and counters made of Acrylic rather than cardboard. This will be a perk for the delay in the project.  Hopefully can show off some of these in a few weeks.
In regards to the rules, I have received a lot of playtest comments and it seems the inititaive aspect of the game is causing a lot of confusion.   I have been rework the initiative mechanics to enhance the flow of the game and make it easier to understand.   I estimate I need about another two weeks to finish the rules and then I’ll be ready to release the most current version for all to see.  I will then wait for another round of feedback before passing it off to Andrea for formatting.   I think the revisions improve the game a lot and make it evn better than before. The feeling of a dogfight will be even more intense.

This does give me the opportunity to paint up a couple of items hanging around the paint table, I would much prefer to have a refined product than rushed out with holes in the rules and poor finishing to the production.
Carrying on the Alex Raymond – Flash Gordon theme, I thought I would paint up these War Rocket Mini’s as Vultan’s Fighters, Hawkmen on their own are not enough to protect Sky City from Ming’s War Rocket’s, although how they they got into the cockpit with their wings is one for me to think about… 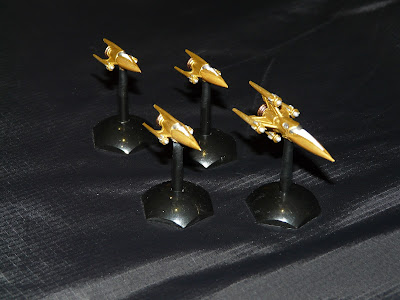 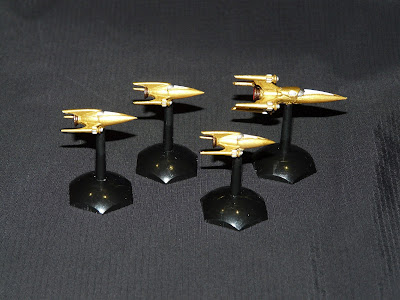 I opted for a couple of shades of gold with white strips for effect, they blend with the mini’s I painted several years ago which have been in storage for several years and looking at some of the older pic’s could do wth a make a make over as my painting style then was rather flat.
Perhaps one day they will get a repaint but for now the new fighters will be gracing the table on Sunday. 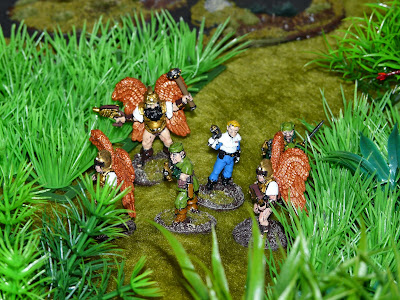