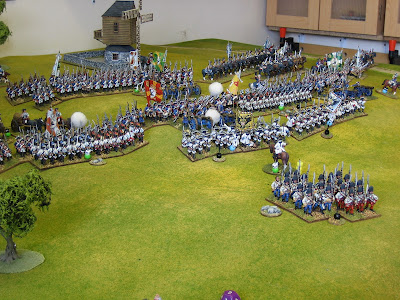 Initiative A9 / P2: The Austrian grenadiers of the reserve (almost immediately turning an Infantry Move in the Open card)  assault the Prussian line of guns and infantry. The assault is launched into a hail of deadly (opportunity fire) musketry and canister (which causes 5 UI loss and forces one unit into retreat) but the second line is in close support and the formation presses the attack.

Meanwhile the columns of the first and second line continue to come up and begin to form into line. They even manage to deploy more artillery. This has been a nice flow of cards and initiative for the Austrians. 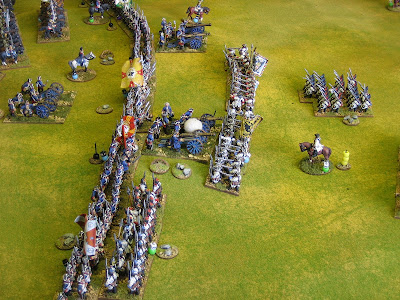 Initiative A10 / P2: The grenadiers of the Austrian reserve now pour in their own fire which is effective but fails to break the Prussians at the summit of the slope (they lose 5 UI overal and the Brummers and PCGrIV are both shaken) but retaliatory (opportunity) fire routs another unit of Austrian grenadiers. Muffling rides to rally one of the grenadier units before it has retreated entirely out of the fray. The Austrian fusillade is renewed and the Prussians suffer further casualties (2 UI loss overall).

Prussian efficiency in musketry now begins to tell (they have more Musket Reload cards than the Austrians and draw two cards back to back (reloading all of the units that fired opportunity fire and standing ready to go again on the next) – they don’t have the initiative to use the second card but its mere appearance is daunting for the Austrians. 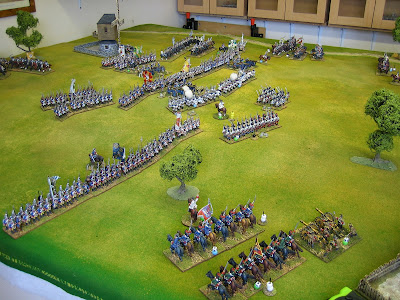 Initiative P18 / A 4: The Prussians open up a devastating round of musketry and one of the Austrian grenadier units is shattered beyond recall. The Prussian guns add to the general carnage.

On the Prussian left the cavalry under Krokow advances to cover the retreat of PCR2.

On the right Zeuner advances his line towards Panten whilst the reserve moves troops up to fill the gap.

The Prussian officers also do their stuff rallying (lost UI) the infantry which have been heavily engaged. 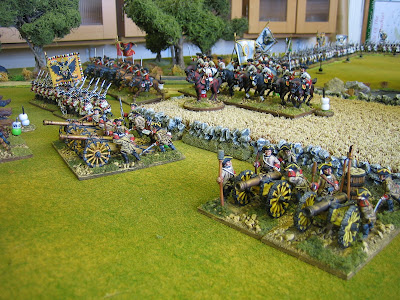 Initiative A8 / P5: The Austrians bring up the last of their artillery. Muller rallies another unit of grenadiers which, to keep the Prussians busy, wheels to face the oncoming infantry of Zeuner’s command. 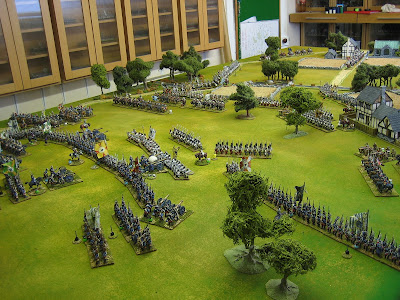 Initiative A11 / P0: The Austrians find few cards to aid with their assault by the grenadiers and use this free of reply initiative phase to hurry the columns of the first and second line into the action.

The Grenadiers have done their stuff. They have prevented the Prussians interfering with the build up of Austrian troops north of Panten.

This is the last intiative phase of turn 2 – the next domino draw was double four and double one and this ended the turn.

Here are three more shots of the action at the end of turn 2.

Back to the game. An AAR of Turn 3 will follow shortly.