Another regiment of foot each for the Parliamentarians and Royalists.

Ended up using the colors for Sir Ralph Hopton’s Regiment as I didn’t have the King’s Lifeguard colors at the moment. It’s red enough and also a Royalists, so it’ll do for now. 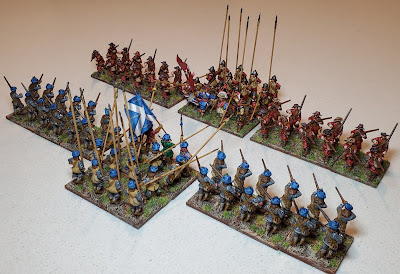 The Scots Covenanters set is pretty much the same as the regular Pike & Shotte foot, but with the addition of metal command figures and also metal bonnets, as well as Scots flags.

Someday I hope to get a game of Pike & Shotte in, but until the current health situation improves, I’ll continue to add more figures and units for the game. Awaiting the arrival of some Perry cannon and Warlord Games Cuirassiers. Until next time, wishing you all the very best and good health.