„Your Majesty, the Oder belongs to the Russians!“ Part 2

5. April 2018Blogs INTComments: 0
We finished the first session’s play with the Prussians crossing their newly constructed pontoon bridge and pressing an attack to dislodge Russian troops occupying the hamlet between the two Prussian objectives (the northern and southern towns).

At the start of the second gaming session I informed the players that night would fall at the end of the session and if neither side had achieved his objective the game would be drawn. Mostly because I needed to clear everything away to make table space to produce the next batch of river this weekend – twenty odd feet of medium span (four inches wide of water) river. 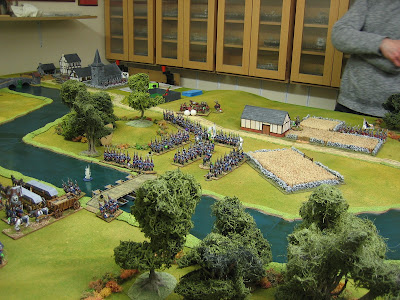 In the first turn the Prussians managed to get their troops across the river with some alacrity and, following a brief firefight, pushed the Russians into the hamlet. 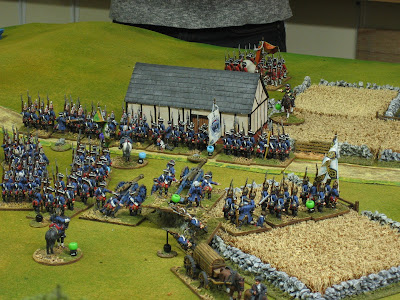 The Prussians storm the position and finally secure their bridgehead in the centre of the battlefield.

They must now decide which town to attack. 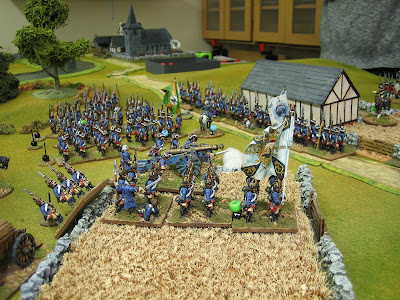 Sending a small force south to hold against a counter attack from that direction, the Prussians decide to attack the town (at the top of the photograph) to the north.

At this point, Peter was trying to conceal his intentions from the Russians but, as the southern town was held in much more strength, the town to the north was always the obvious target. 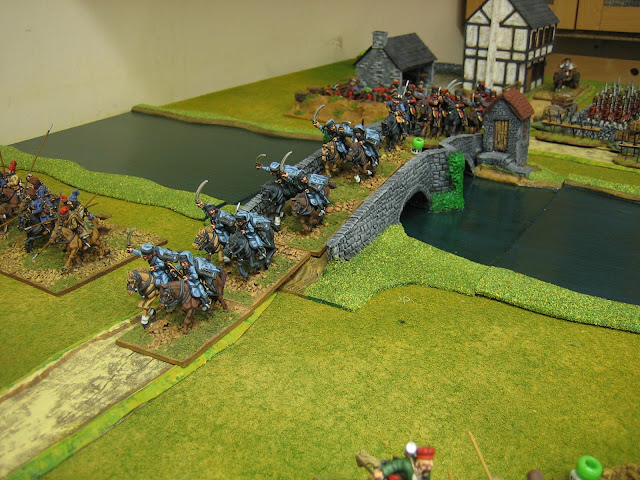 Now was the point that Graham decided that his only chance of victory was to try and take one of the Prussian hamlets on the Prussian baseline – if you remember, this would bring shame on the Prussian commander and end his career – with a daring blitzkrieg attack.

The Prussians retained a strong previously uncommitted holding force across the river in the south so a Russian attack here was impracticable.

Graham made the wager. He depleted his defending force at the northern town, with the Prussians massing in some considerable force just to the south, and attacked across the river! 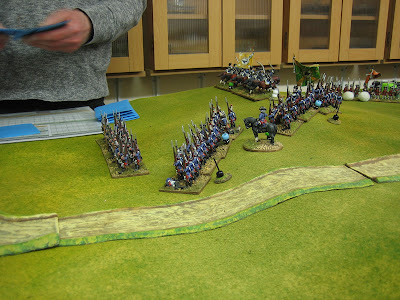 A race now developed between the two sides.

Shielding a strong force of infantry from possible interference from the south the Prussians marched towards the northern town as fast as they could go.

However, the Russians were winning most of the initiative points and their daring northern attack was gathering momentum. 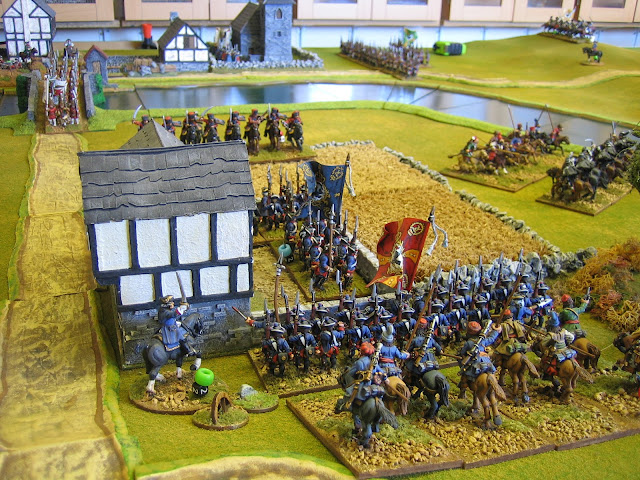 At first it looked like the Prussians were going to stop the attack in it’s tracks. They won just enough of the initiative to march down into the valley and gave the Russian hussars considerable grief with several well directed volleys.

Then the initiative swung again and, just as Russian infantry support  (in the shape of grenadiers) began crossing the bridge, a bunch of pesky Cossacks somehow (sequence cards falling in exactly the right order in close succession) got behind the Prussian infantry. First they discomforted the Prussians with some very lucky carbine fire, then charged them in the rear (under our rules it’s difficult for Cossacks to charge anything so even getting to contact was a feat in itself). 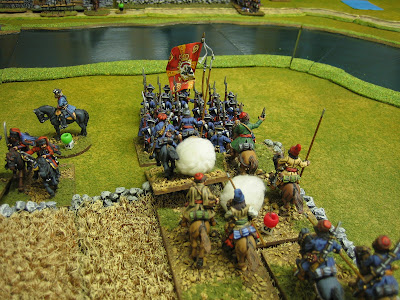 The Prussians were routed in short order and the gleeful Cossacks set off in pursuit.

This was a real turn up for the books and put the Prussian plan into chaos.

On reaching the west bank of the Oder the bewildered Prussians tried to surrender. We had to look away at this point. 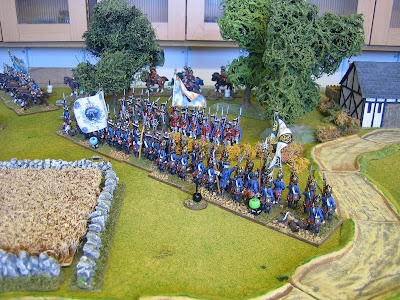 Because meanwhile, in the south, the Prussians began to advance towards the town there too.

For the life of me I can’t understand why Peter decided to spend his initiative points here, unless he was hedging his bets in case things didn’t go well in the north.

Or, perhaps it was the ‚Cossack thing‘. 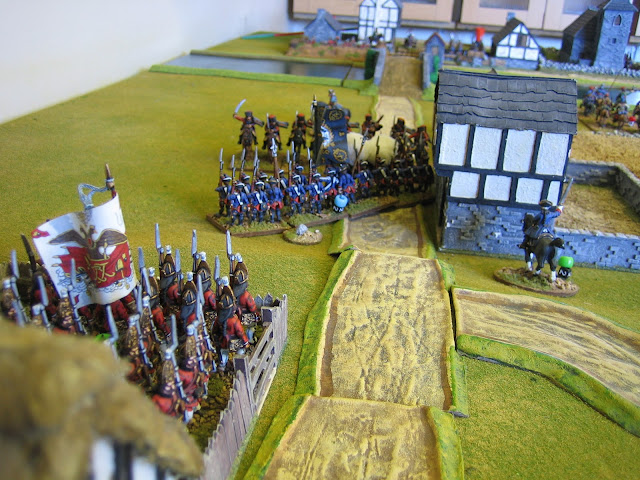 Back in the north, the only remaining Prussian infantry unit west of the river now found itself isolated and pinned down by Russian hussars. They were thus unable to respond to the forced march of the Russian grenadiers to the Prussian hamlet, which they duly occupied.

Just down the road, the Prussians had forced entry into the outskirts of the town and, following a brief exchange of fire, the last defending Russian infantry unit took to its heals.

Shortly after this, the penultimate turn of the game (it was about 10.30 pm.) ended.

If the Russian could hold their towns and the hamlet until the end of the next turn they could claim a major victory. If the Prussians could evict the last Russian unit (artillery) from the northern town (incidentally cutting off the Russians on the west side of the river) they would win. 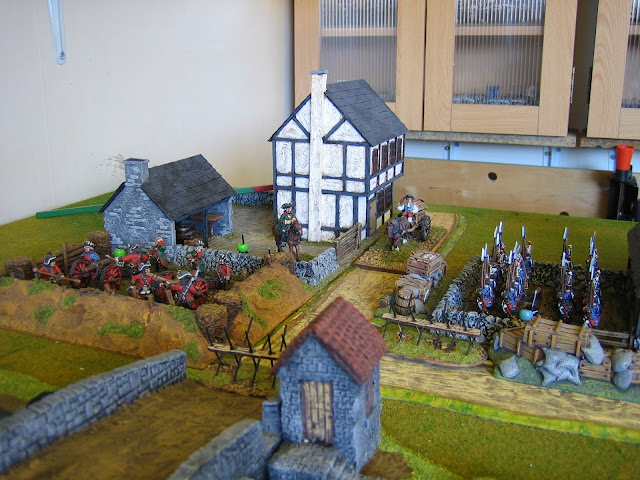 Attention now switched entirely to the northern sector and the Russians immediately won a massive chunk of initiative and began cycling through their sequence deck – going for an early turn finish. One more run like that and……….

It was not to be. The Prussians won the next batches of initiative and their grenadiers moved through the town as fast as their little hairy legs would carry them and then they threw themselves at the artillery redoubt on the first melee resolution card that came up (they actually used a Heroic Moment card to initiate the melee). It was over in seconds. The Prussians had the town and were holding it in force. A Prussian victory for Peter.

Best game of the year for me (umpire) with a very exciting ending.