„Your Majesty, the Oder belongs to the Russians!“ 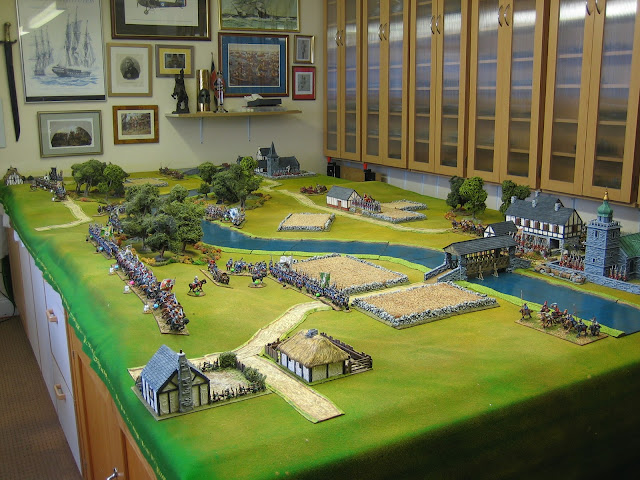 This scenario is a river assault game set in the Seven Years War in 1758 and gives me the chance to use my new ‚wide‘ river sections and pontoon bridge and train. The scenario will be fought out using our amended version of Piquet.

The Russians have once again invaded Prussian territory whilst the bulk of the Prussian army is away in the south facing the Austrians. They have taken up positions on the east bank of a big meander in the Oder river, guarding the bridges, in order to defend their territorial gains until further instructions arrive from the Empress.

On hearing the news that ‚the Oder belongs to the Russians!‘ King Frederick has sent peremptory orders to counter-attack with the forces immediately available and force the Russians back on their bases in Poland. The local Prussian commander is under no illusions: The Russian advance is an affront to Prussian prestige and further Russian incursions will not be tolerated. 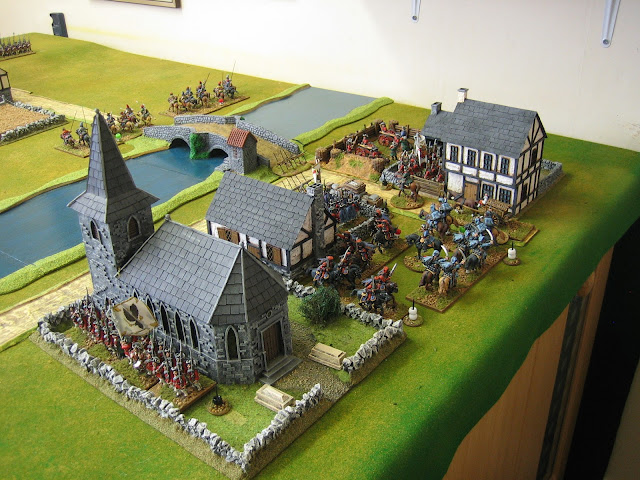 The Russians are situated, in the main, at three points. They hold the two towns where significant bridges are located and a small, linking hamlet between them. Patrolling is being carried out by bands of roving Cossacks whilst the line troops are content in the comfortable billets being unhappily provided gratis by the local inhabitants.

In the northern town the Russians have two commands.

1. A unit of grenadiers, two units of line infantry and a battery of field guns. The guns have been sighted in a redoubt with superior fields of fire to cover the bridge. The town section nearest the bridge has been prepared for defence.

2. Two units of hussars and two units of Cossacks, the latter patrolling west of the river. 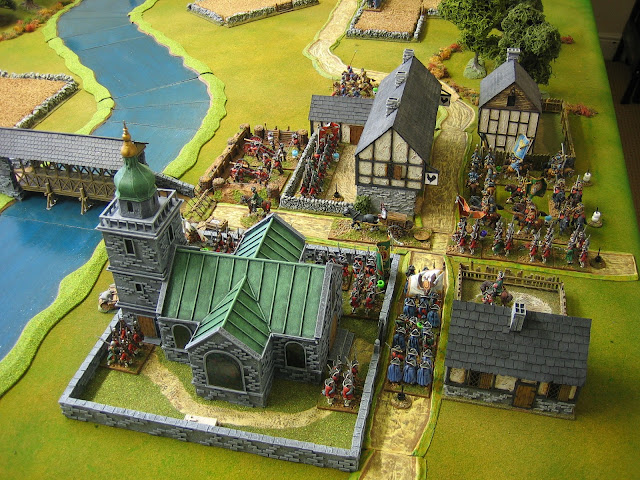 In the southern town the Russians have two commands.
1. Two units of grenadiers, three units of line infantry and a battery of field guns. The guns have been sighted in a redoubt with superior fields of fire to cover the bridge. The town section nearest the bridge has been prepared for defence.
2. A unit of cuirassier, a unit of horse grenadiers and two units of Cossacks. One unit of Cossacks is patrolling west of the Oder, the other is patrolling just north of the town.
Note: That’s a new church with a slightly ‚Bohemian‘ look to it. It’s been hanging around the place waiting to be painted for quite some time. I think the green copper roof, though a little ostentatious for a small town / village church, adds something to it. Mostly MDF and balsa wood with War Bases doors and windows). 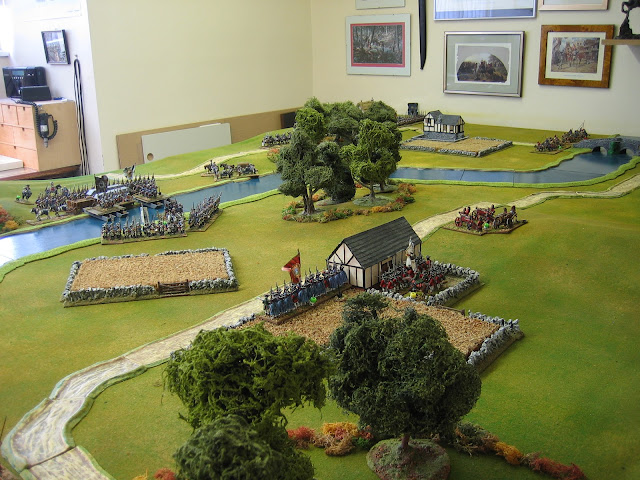 Between the two towns a small hamlet is being used to billet a small command of two unis of line infantry stationed to support a battery of howitzers sighted to cover the river from commanding high ground.

The Russian game objective is to hold the two towns and their bridges. They might also wish to consider disgracing the Prussians by taking either of the small hamlets (on the Prussian baseline) and holding them for a complete turn in the presence of the Prussian army. Although the Russians will suffer a defeat if they lose either town, they can automatically claim a scenario victory for taking and holding a Prussian hamlets because of the political and morale damage this will have done to Prussian prestige (not to mention the Prussian commander’s career prospects).

Note: Offering the Russians the chance of victory by attacking (the hamlets) was done for two reasons: It gives the Russians more options than to simply hunker down and, more importantly, it should prevent the Prussians simply massing in one place to bring overwhelming force to bear at a single point. 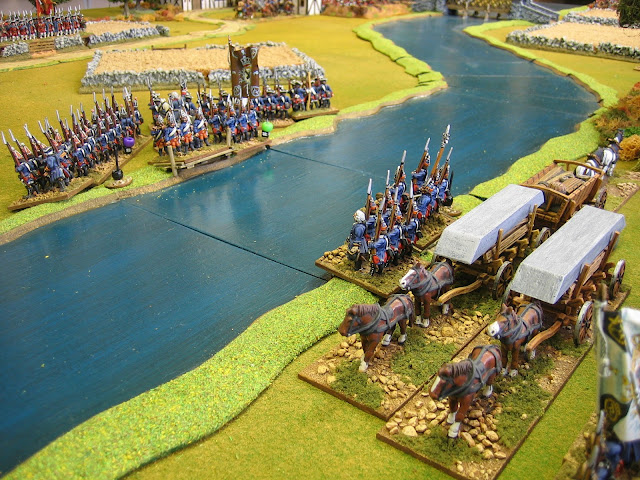 During the night, and without opposition, the Prussians have advanced to the west bank of the Oder.  Here they taken up positions facing the Russians.

The night has not been wasted. Using pontoons the Prussians have managed to ferry a unit of grenadiers and a unit of line infantry to the far bank to protect a bridgehead for a pontoon bridge which is now under construction by a unit of pioneers. These form the ‚bridgehead‘ command.

(Note: The fusiliers I used to represent this unit are IR 49 which were converted from the ‚Pioneer Regiment‘ into fusiliers at the end of 1758. They are a very pretty regiment, in their bright orange waistcoats and breaches). 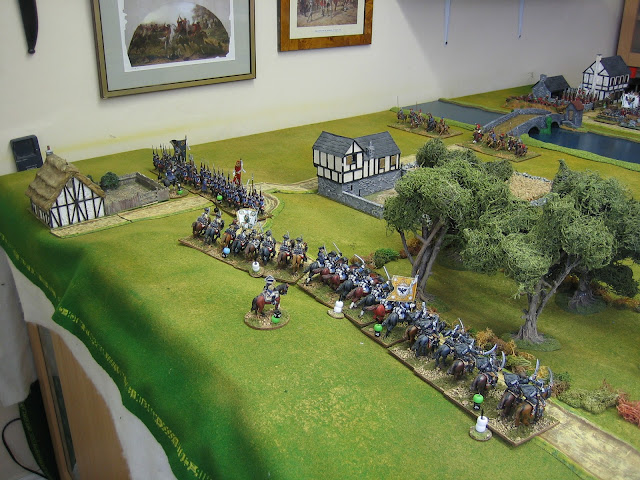 Stationed to face the northern town the Prussians have deployed two commands.

1. A unit of cuirassier, a unit of dragoons and a unit of hussars. 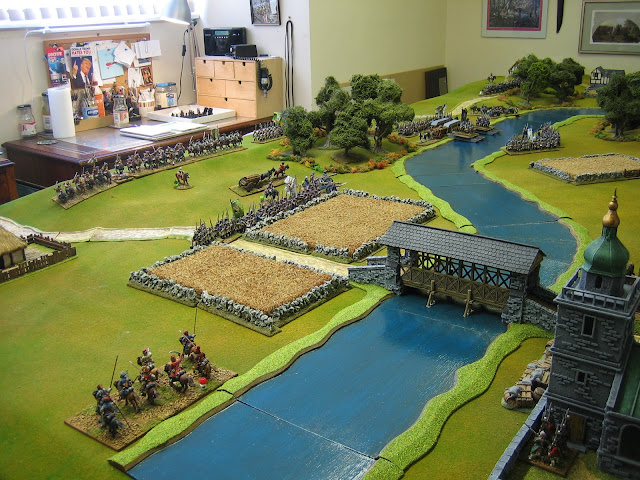 Stationed to face the southern town and behind the proposed pontoon bridge the Prussians have placed three commands (not including the ‚bridgehead‘ command).

1. Two units of line infantry, one battery of field guns (directly opposite the town).

2.  A unit of cuirassier, a unit of dragoons and a unit of hussars.

3. Two units of grenadiers, a unit of line infantry, a unit of fusiliers and a battery of heavy guns (stretching behind the wood and behind the pontoon bridge).

The Prussian objective is to take one of the towns. This will dislodge the Russians and force them back into Poland. Attempts must be made to prevent any further incursion into Prussian territory (the hamlets on your baseline are Russian objectives and should be be defended – see Russian objectives) as any such incursion will incur the wrath of the King and your personal disgrace.

Note: I added two Sapper Task cards to the Prussian sequence deck. I counted the abutments at each end of the bridge as constructed before dawn. The bridge takes a minimum of four tests to complete, with each test laying either two pontoons or the deck over two pontoons. On each card the sappers roll for a task completion. Bridging can be delayed by a failed test or four points of accumulated damage, the latter destroying the work completed on a successful check. Sappers can be tasked with ‚repairs‘ rather than ‚building‘ to remove up to three damage points. The Prussian base die for Sapper task is D8. The Sapper Task table we use in our amended Piquet rules is detailed below.

THE BATTLE ON THE ODER 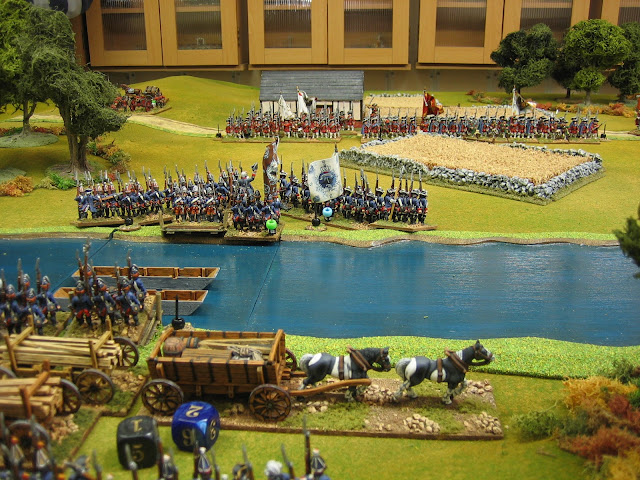 Dawn has broken and the Russians quickly become aware of the work being carried out in the great meander of the river. Rushing troops from north and south to reinforce the command at the hamlet they concentrate to oppose it.
The Prussians make slow progress building their bridge. Work at the construction site is hampered by constant fire from the Russian howitzer battery. 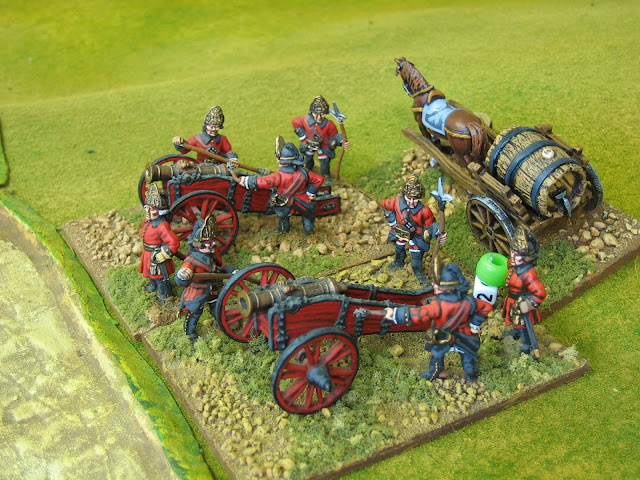 Russian howitzers lob shells at the pontoon bridge at every opportunity (especially when they have the chance to fire on ‚Heroic Moment‘ cards). This handicaps the Prussian bridge building and buys time to collect together a force that might be strong enough to break into the Prussian bridgehead. 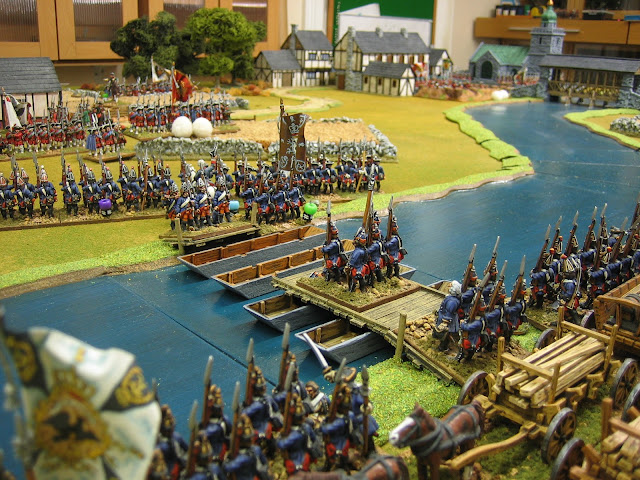 The battle at the bridgehead erupts into full fury. Outnumbered two to one the initial Prussian position looks precarious but, quality tells. As the bridge nears completion the Russian attack begins to disintegrate.

Note: Pontoons and bridge are scratch made from balsa wood. The wagons are all MDF by War Bases, though the pontoon wagons are simple farm cart conversions. 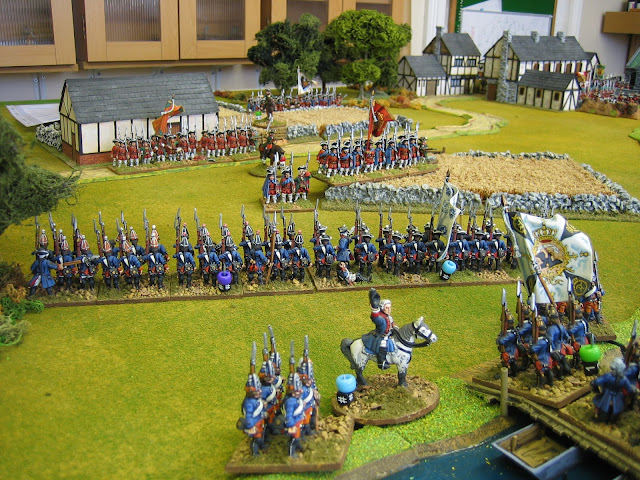 Towards the end of turn four the bridge is complete and the Russians are falling back towards the hamlet under pressure from the ‚bridgehead‘ command. 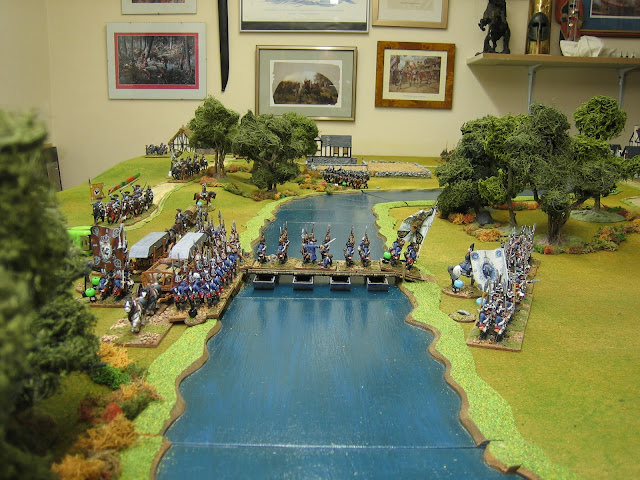 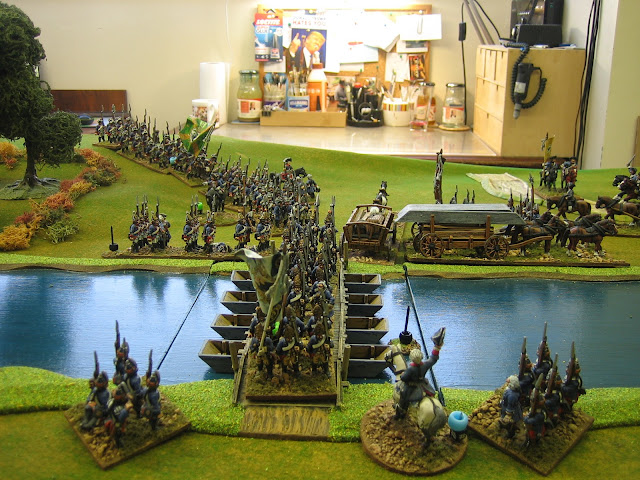 At the end of the first game session, the Prussians have begun to cross their newly constructed pontoon bridge. [First shot on the night, this one staged this morning].

Note: I have to say, games involving engineering tasks are a lot of fun. The pontoon train and bridge cost less to buy than a unit of troops and probably took about the same amount of time to put together for the table; as a cost to fun sum it definitely works for me.