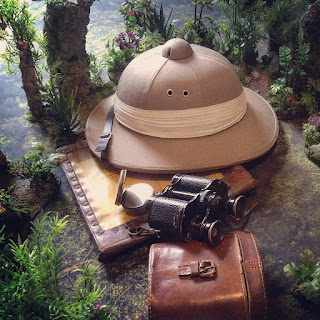 Saturday saw my first proper game using the Congo ruleset from ‚Studio Tomahawk‘.  In one of those all important bouts of introspection it had occurred to me that my hobby progress was being hampered by a lack of any discernible progress in any one area – surely the goal had to be to playing a game, but which one?  The discovery of Congo seemed to give me the direction I was lacking and written, as it was, in a light hearted and often humorous way the rules seemed much more accessible to this novice wargamer.  The style combined with a card activation system and the use of tokens to record the ever increasing level of stress seemed to help make the game a more comfortable crossover from the collaborative board games that I was enjoying to a ‚real‘ wargame.  So from ‚Salute 2017‘ Congo had become the focus of my hobby time and to give that focus a tangible time frame I made the decision to host a game during the eagerly awaited summer holidays.  A brief email exchange between Mike ‚The Dark Templar‘ Reynolds and ‚Bullcher Feb‘ of the splendid and often humorous, ‚Bull’s Waaagghhh‘ blog resulted in a date being tentatively placed in the diary and so countdown began. 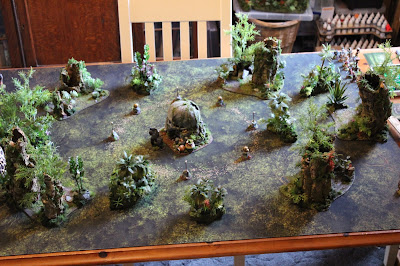 With very little responsibility befalling me during the holiday time and with the ‚Saintly Mrs. Awdry‘ determined to improve her golf game, I have been afforded a good deal of time in preparation for this game.  Miniatures were assembled, primed and painted and terrain has been resourced and constructed with rules tested and learnt.  In fact this process has been such a wondrous distraction during a month that was to prove difficult due to personal circumstances.  Such was the level of industry that I will have blog posts aplenty for the weeks to come, but more of those another time. 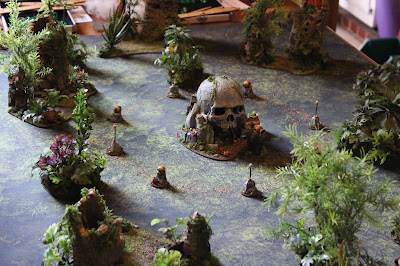 So returning to the day and the game in hand.  I had invited the chaps down to darkest East Sussex with the intention of running through the second scenario, ‚The King of the Apes‘.  Mike’s White Man’s Expedition, after weeks of hacking through the jungle, were finally in a position to discover and capture the mighty Kong.  Meanwhile Bull’s Forest Tribes were intent on harrying the intruders and protecting the sacred creature.  All was prepared, briefing notes had been sent earlier in the week, I had set up the board the night before and I knew that the table was ready, but how would they chaps take to the game? 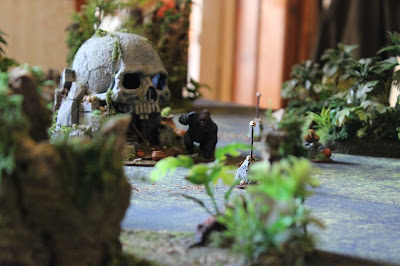 I had decided to take on the role of ‚Jungle Guide‘ and lead them through the initial exchanges, but such was the adaptability of the pair that it wasn’t long before the two were locked in battle and needing very little direction!  When preparing the Forest Tribe column with its Pygmy Warriors, Cannibals and Witchdoctor it occurred to me that the unpredictability of the group would be just what a seasoned ‚Ork‘ handler would enjoy and initially assigned them to Bull – I could not have been more on the money!  The mischievous, frustrating nature of this column was expertly put to devastating effect by Bull, aided by some of the most spectacular dice rolling I have ever seen, the  jungle spirits were definitely with him on the day!  Mike on the the other hand was being frustrated by the lack of success with his rolling, a particular case in point being the inability of a unit of trained, Indian soldiers failing to hit a barn door* whilst rolling a handful of D10s! 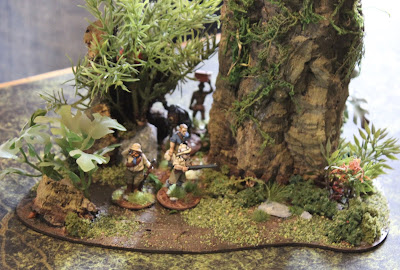 *quite what a barn door was doing tin the jungle was anybody’s guess?
The ‚White Man’s Column‘ limped through to a timely lunch break and being a stout heartened sort of chap that he is, Mike agreed to venture into the Jungle for another time.  With Bull handing over the reigns of the Forest Tribes to myself it proved a much more cagey encounter.  A greater understanding of the objective and fairing slightly better** with his rolling, Mike was able to successful track and capture the great ape! 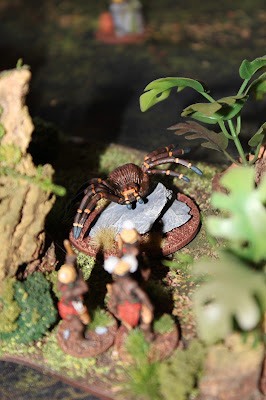 **albeit only slightly!
With a couple of games under our safari suit belts it was time to end the day and as I wished the plucky adventures well on their return journey to Kent, I was suddenly struck with the sickening thought that I hadn’t really taken any photographs and so this rambling collection of thoughts can barely be called a battle report.  Fortunately both Mike and Bull have written up their day and can be found at Congo! and A Trip Back in Time respectively.  As for me, the day could not have gone better and I felt that I had achieved my goal of taking an idea through to completion.  With a good number of miniatures now already painted, I shall definitely be looking at another possible scenario to work towards, something with crocodiles sounds favourite! 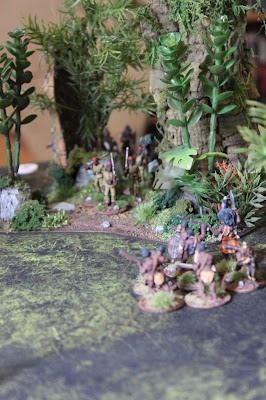 What I must do though is take a moment to thank both Mike and Bull, who have both been incredibly supportive and encouraging.  This was a completely new ruleset for them and certainly not a period that they would normally game and yet they both indulged my wish to take part and made the day the success that it was, thank you chaps!
So as hinted earlier there will now follow a series of posts that will certainly take me through August and into September as I sift through the photographs that I have taken and document my thought processes in building the terrain and bringing it to the table, but in the meantime I have included a couple of shots that I did manage to remember to take on the day.  I should perhaps also mention that only moments before our intrepid adventures arrived at ‚Awdry Towers‘ there had been a loud knock on the door.  There standing on the threshold was the Postman with a very large box – Massive Darkness has arrived! 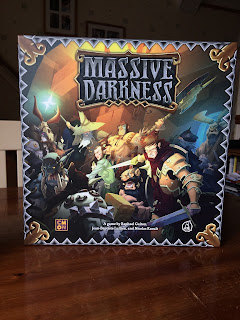