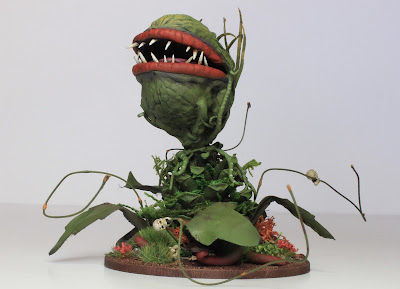 One of the great joys of being part of a hobby community is the sharing of thoughts and ideas.  A great many of my flights of fancy, or even whole projects, have started as a result of seeing a related article on one of the many splendid weblogs that I follow.  This latest piece of floral frippery sprang from a chance comment posted by Peter Douglas, of ‚The Single Handed Admiral‘ fame, who asked as to whether Audrey II would make an appearance in the newly created jungle terrain?  Now sometimes these little kernels of an idea are sown, they take root and sprout and the only way to sate them is to harvest whatever comes to fruition. 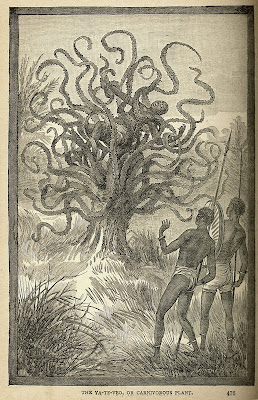 The ‚Dangerous Terrain Table‘ in the Congo ruleset* makes mention of a ‚zone full of venomous plants and their contact is extremely irritating‘.  Now whilst Audrey II’s manner is renowned for being acerbic she wasn’t, by definition, venomous.  Still I felt there was a little leeway to include a carnivorous plant and with little more web based research unearthed mention of the Ya-te-veo in In J. W. Buel’s Sea and Land, 1887.  Listed as being native to Africa and Central America the Ya-te-veo, or I see you plant, is described so elegantly as having tendrils that resemble ‚many huge serpents in an angry discussion, occasionally darting from side to side as if striking at an imaginary foe‘.
*To be consulted when exploring a piece of dangerous terrain for the first time. 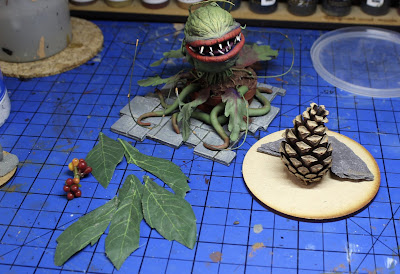 So with a precedent set next came the design, how would this work?  With Audrey II’s head attached to her original body with a magnet, I knew that I could re-use that element so it was just a matter of creating her a jungle base to live on.  I chose to employ most of the same techniques that were used in the original build with Milliput for roots and paper covered florist’s wire for the whipping tendrils.  I also managed to find one last silk leaf that I cut up to make a number of smaller ones for Audrey II’s foliage along with some plastic berries languishing in the bottom of the bag. 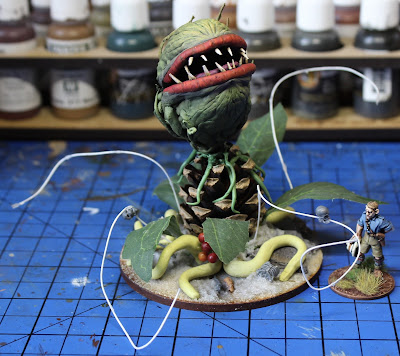 All that remained was to find a body to build upon?  Inspiration came in the shape of a small fir cone and this was duly appropriated for the task in hand, although I did make a slight schoolboy error here.  What I had forgotten, of course, is that the fir cone would open up as it dried and as you will see in the initial build photograph the rather nice, curving shape of the cone gave way to the slightly more open, obviously fir cone shape, of the final build.  Still with a few Green Stuff tendrils and some remnants of the moss roll used in the ‚Dangerous Jungle Terrain‘ build, I was able to plug the unsightly gaps. 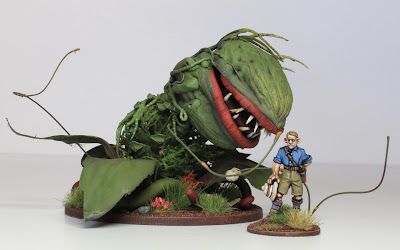 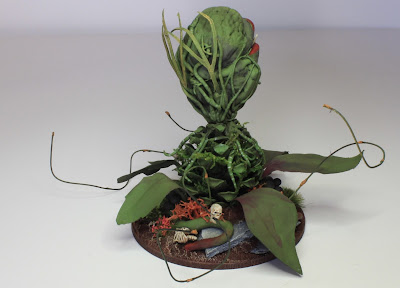 A rummage through the bits box unearthed some suitable macabre remains and I drilled out a couple of plastic skulls and threaded them along the Audrey II’s terrifying tendrils, hopefully giving the impression that they grown through their victim!  This rummage also saw light fall on a couple of Dave Stone’s Amorphophallus Titanium, from his Flowering Amorphophallus pack available from the wonderful ‚Wargames Terrain Workshop‘.   Now I appreciate that these are, geographically, a South American species, but I felt lent something to the Lost World feel of the piece and so was happy to oblige them a matching paint job to complete the project. 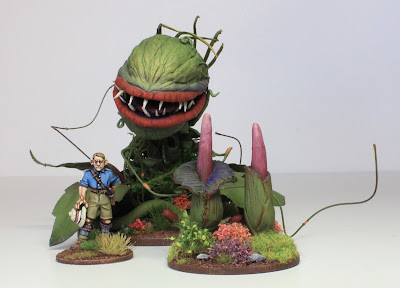 So Audrey II has an ‚away kit‘ and the jungle has a new nightmare awaiting the luckless adventurer who is foolish enough to pick her berries. 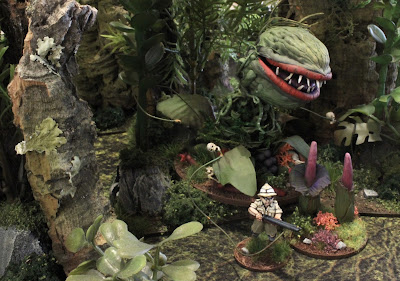