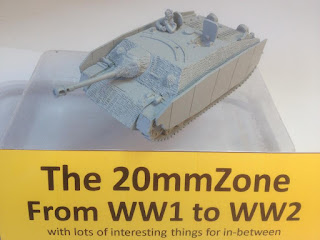 So far, I’ve been raiding my existing stockpile of Italeri and Armourfast quick build kits, adding some new models for the Germans via eBay. I’ve thought about building some ‚proper‘ 1/72nd scale kits from the stash in the loft but have shied away from this option, as I don’t really have the time and don’t fancy gluing all the fiddly bits together. I don’t think they would look great next to the quick build stuff either.
Anyway, an option I’ve been looking at for those ‚one off‘ missing AFV’s that you just have to have at least one of, is the Early War Miniatures range of ‚Blitz Build‘ plastic resin and white metal models. These look pretty good and aren’t too expensive compared to normal injection moulded model kits. They also fill in a lot of the blanks, are quick to build and include some pretty neat early and mid-war AFV’s.

For my purposes, however, it’s the late war German tank destroyers that caught my eye, specifically the Hetzer, Nashorn and Jagdpanzer IV. I may well send off for one of the latter when I’ve ploughed through more of the existing back log of  plastic quick build models. The Russians need to be wrapped up first anyway before I can tackle any more of the Panzers!