18. Januar 2019Blogs INTComments: 0
Just a few Perry dismounted French Dragoon skirmishers. Another unit for a cavalry-centric Black Powder game I am scheduled to host at our annual big con, Enfilade!, in May. 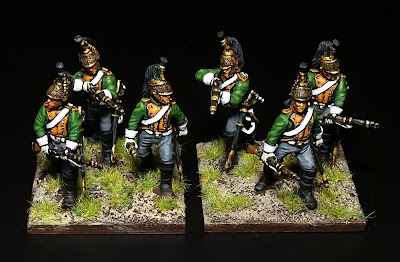 These figures were picked up as sprues from the Perry’s plastic accessories page. In fact, the mounted Dragoons I have were left overs my buddy gave me for painting up some from is set. 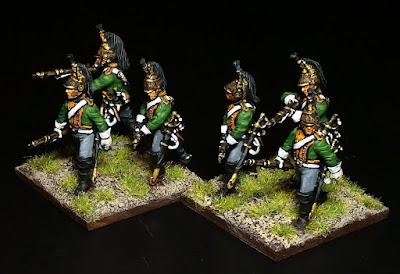 I had forgotten that these figures have three arm set poses; firing, musket at low port and trail. I had painted up a few for my buddy along with the mounted guys. 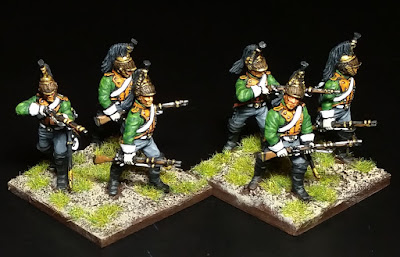 These are the ones I painted for my buddy some years ago – in coats with Spanish brown cloth.

Kind of a slow start for the new year as I tend to paint in spurts. Mostly long sessions on weekends with lethargic lulls in between during the work week. After a long day at work, followed by defensive driving on I-5, all I feel like doing is laying on the couch sipping watered down box wine and watching YouTube videos of prison stories and bigfoot encounters. 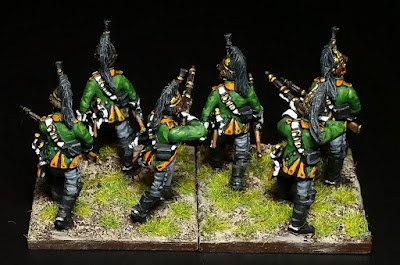 Next up is the pontoon bridge and pontoniers. Once they’re done, I hope to get a play test going. I keep saying that, but keep wanting to add more figures to the game first. Well, best wishes to you all and thank you very much for stopping by.