The joy, and trials and tribulations, of starting a business 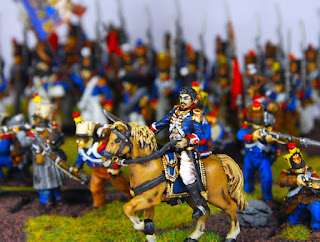 So, it’s been a while since I posted anything more than a few photos… and I wanted to post a bit about the new business!

On the positive side… holy crap, it’s been SO much fun.  I mean… just being able to create something from nothing, and see that something painted up and on a wargames table… that’s been AMAZING.  It’s also been great to get to meet some of the people I’ve gotten to know through the miniatures world over the years I’ve been around toy soldiers, and great to travel to new places and go to shows I’d never have a chance to go to… it’s been such, such fun, even if we haven’t become rich… it’s the experience, right now, that is making it worth it.

But holy cow.  What a learning experience.

The first few months have been a learning experience like I never thought possible.

The first thing that we’ve run into is the definition of a „first world problem“… the initial response to the Miniature Yous and the tanks that we can make was WAY more than we anticipated.  We’ve tried to get through it as best we can for the first month or two, but we’ve hit a point where we needed to step it up, in terms of production.  It will take many thousands of dollars of investment (we are picking up several new printers this week) and its definitely a bit of a stomach-lurching proposition, but I think it will be worth it.  Plus, we are hiring a few interns, which should move things along SO much more smoothly!

But there have also been so many lessons learned just in the actual production of our product!

The 3D printer is a really miraculous thing… but when it goes wrong, it goes WRONG:) 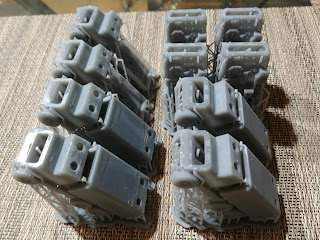 We’ve had a number of prints that have failed for one reason or another.  We did a 28mm A7V that failed in the last hour of 22+ hour print… TWICE.  There goes three SOLID days of printing time, all to make a single model.  The photo above?  A 20 hour print that was 19 hours and 45 minutes in when the power flickered, and voila; 20 hours, down the tube.  In fact, that’s been a reoccurring theme… my partner, Mike, lives in the woods a bit, and when the power flickers for even a second, BAM, the current print is dead.  I cannot tell you how many times he has called, and you can just HEAR the depression in his voice… „22 Miniature Yous, 20 hours of printing, and the power just went out with ten minutes to go.“  Ugh.  It’s like getting kicked in the stomach.

Thankfully, between getting the new printers on Monday and getting a backup power source, we SHOULD be able to handle this a bit better… but man, it take a LOT of money to do that, and I think I’ve got a LOT more gray hair because of it! 🙂

We’ve also had such problems with shipping!  Who would have guessed?!  When we first packed up our Cold Wars orders, we were SO happy… first con, DONE!  But then… oh boy.  Mike went to the post office, and TWICE they straight up TURNED HIM DOWN.  Like… they refused to ship so many packages!  What?!  Can they DO that?!  And then… holy cow, it feels like a quarter of the orders never got to their purchaser.  We spent I think three weeks just reprinting and resending orders, which just backed up our NEW orders even more… but you’ve gotta take care of older customers first!  We’ve since switched over to a more reliable shipper, but it’s been an exhausting part of this.

Even the technology has been a brute!  Thanks to something we hadn’t anticipated, we were scanning at Cold Wars at a resolution that was FAR more than we needed.  Cool, right?  I mean… more resolution?  Except no; there was no real difference in the product, but the resulting size of the files kept crashing our 3D program!  Mike estimated it added about a hundred hours of work time to the Cold Wars orders, as he would spend 30 minutes on something only to have it crash and lose all the work, and then do that again, and it would crash, and again… but because those were the scans we had to work with, we had no choice.  But… woof.

And to top it all off, there is real life.  I’ve got two little kids, and both my wife and I work… me as an elementary school teacher, my wife as a family therapist.  I work days, she works nights, and as you might imagine, that doesn’t leave a lot of time.  And Mike has been hard at work over the last few months selling off his family business.  Now, I’ve never closed a business before, and after hearing the stories, I am AWFULLY glad I’ve never had to!  Between customers simply refusing to pay outstanding bills (BIG BIG outstanding bills!), laying off a staff, trying to sell a warehouse and an office, taking care of tax after tax after tax… and all while juggling our new venture… I think Mike is only sleeping four or five nights out of seven.  Thankfully he is a younger guy;)

… there is light on the horizon!

Mike finally wrapped up his last major bit of closing the business at the end of this past week, we’ve got nearly all of our Little Wars orders packed up and shipped out, we’ve got two more printers on the way, and we are about to hire on our first staff… and it FINALLY feels like we are able to take a breath. 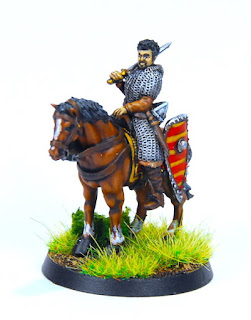 So yeah… it’s been great, and it’s been a learning experience:)

Anyway… I don’t know how many of the people who read this blog care about any of this, but it’s become SUCH a big part of my toy soldier life, and I just wanted to share:)

If you ARE someone who has purchased any of our stuff, I’m just so thankful for everyones support…. everyone has been really great about this… and thankful for your patronage… and most importantly thankful for everyone’s PATIENCE with a pair of guys who literally started something out of nothing in an attempt to DO something with their lifelong love of toy soldiers… and I’m SO happy that things are looking very, VERY up!:D